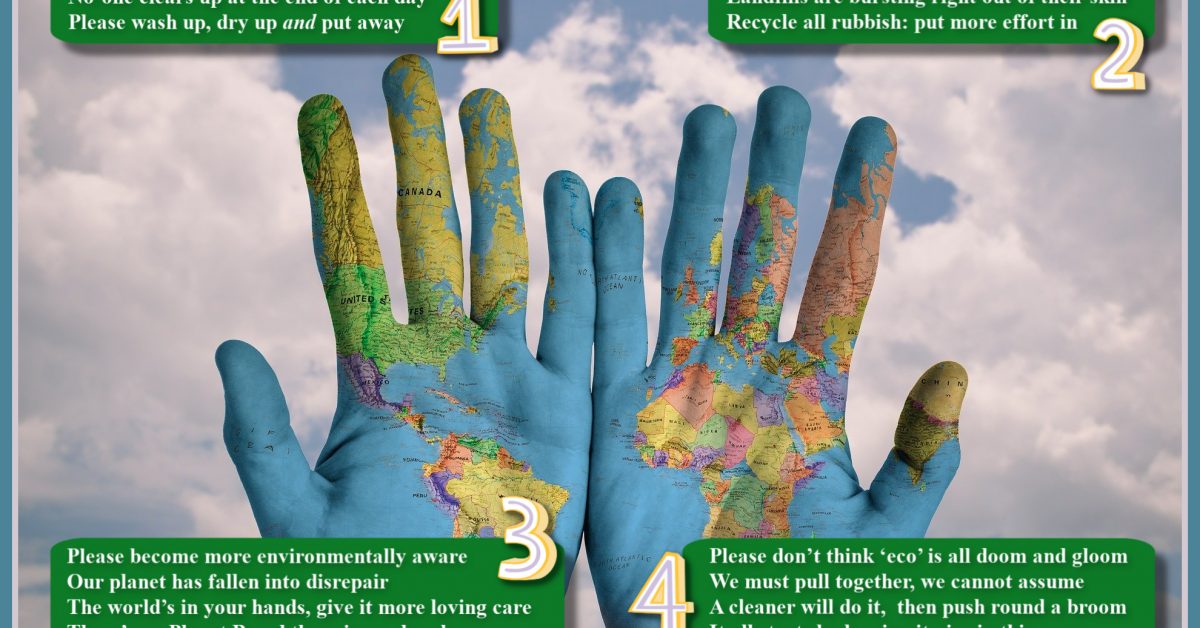 What started as a desire to create a polite sign in our communal kitchen at work, telling people to take responsibility for their rubbish, has turned into something much wider and more poetic. As usual, when we unearth something useful for the planet, we like to share the love and spread the word!

At the start of the New Year, the Word Forest Team moved out of a home/office and into proper office premises, in Lyme Regis. We occupy one of several units in St Michael’s Business Centre, a building that used to be an old primary school.

There’s no doubt about it, it’s amazing to be here. We now have more space than you can shake a proverbial stick at and as a result, we’ve had new volunteers step forward too, which is marvellous. This will help us raise our bar and scale up our operation. The list of other benefits is endless and the fact that we don’t trip over each others legs on the way to the printer, is a welcome bonus.

For the businesses at St Michael’s, there’s a commercial recycling bin outside in the car park for plastic, paper, card and tin and beside it, there’s another bin for general waste: there is no provision for compostable waste.

We’re prolific tea drinkers and we enjoy nomlicious homemade vegan lunches in the kitchen at midday. To deal with unavoidable food waste like fruit peel, tea leaves etc, we decided to bring in a big tin from home with a compostable caddy bag. We take it home at the end of the week and pop it in our food recycling waste bin – no problem! The thing is, there are a few people who float through and use the shared facilities and they leave it looking like a whirlwind has struck. I reckon they think, ‘It’s OK, surely there’s a cleaner along later who will tidy up the mess and sort out the rubbish’… No doubt, this is a common problem in offices everywhere.

Whilst trying to solve our local environmental issue, it got us thinking about the wider problems we all face when encouraging people to take greater responsibility for the waste they produce and the wake they leave behind them.

Interestingly, according to an article in today’s Facilities Management Journal, the latest research from YouGov reveals that the public are still confused about recycling, particularly on what to do with recycling outside of the home: over a third of consumer’s admit that recycling confuses them, in general.

This confusion has translated into complete distrust of recycling labelling and ultimately to lower rates of recycling. There’s a massive disparity between the habits people have at home and what they actually do at the office.

Apparently, the public are almost twice as likely to always recycle at home, than they are at work. The bottom line is countless tonnes of unnecessary materials end up in landfill.

66% of people surveyed said it has become, ‘a lot easier to recycle’ over the past 5 years and 91% believe that recycling, ‘is actually worth it’ in terms of time and energy output.

The YouGov survey also concluded that better signage will encourage more responsible actions. We believe you get far better results from people when you apply the carrot approach, as opposed to the stick.

So, to that end, we’ve decided to write a bit of upbeat poetry to make a start in our shared kitchen. If you like the poem and the message, click here to download it, then print it off and put it up in your office kitchen! We’ll challenge our eco-poet in residence to tackle the topic of wider recycling in the office sometime soon – I suspect another poem might already be brewing…