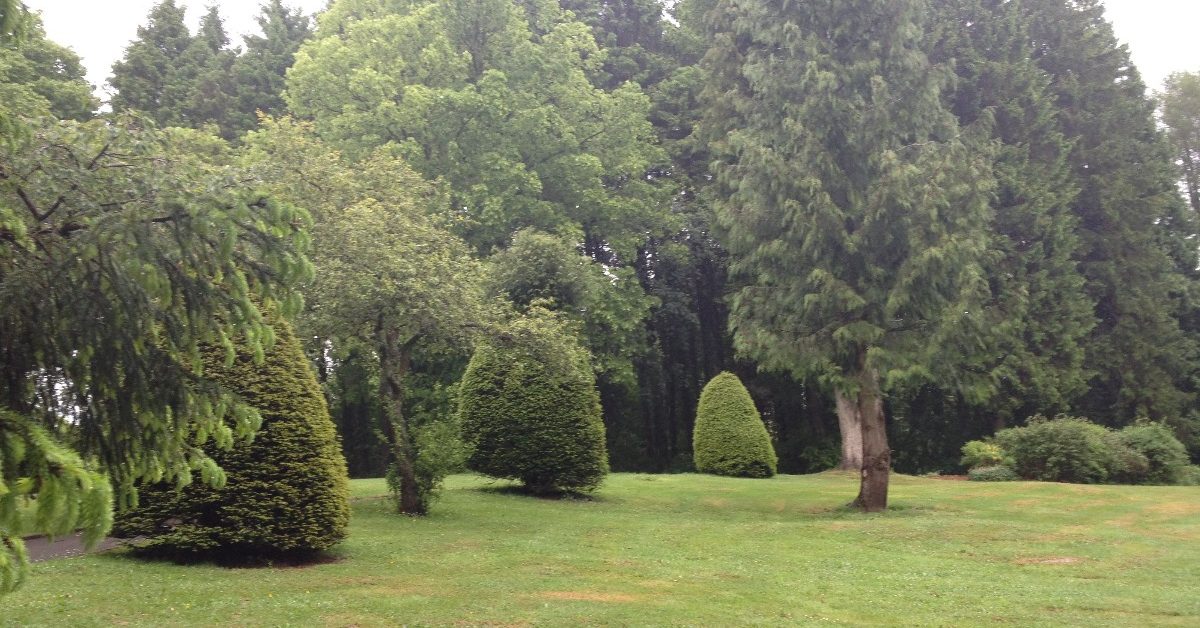 Trees I Have Known And Loved

It was in my grandparents’ garden, nestled on the hillside of a Welsh coal-mining village, where I first fell in love with a tree.

That garden was a perfect playground for running, playing mock battles and games of hide-and-seek with my younger sister and cousins. Much of it had been turned over to vegetables, but the front garden gave way to a more leisurely lawn graced with a rather fine holly tree, one of a pair that symmetrically towered over the old Victorian gate posts and stone steps that led to the drive outside.

I was mesmerised by the beauty of that tree. The prickly ‘design’ of the leaves, its evergreen nature and the beautiful red berries that would appear in winter. In my head I claimed it as my own and as soon as I was tall enough to climb its generous branches, it became a favourite hiding place, a peaceful place and just a lovely place to daydream.

I’ve always found comfort and adventure in the company of trees, whether climbing that old holly tree, running through a small woodland on the other side of those gates or visiting the magnificent forested Victorian park on the steep hillside. The nut trees on the hill above a neighbouring village also provide fond memories of foraging from an early age.

Having left my childhood village to settle into student life in Nottingham and then follow my career to London, urban trees became a source of solace. From the leafy tree lined avenues of West Bridgford and Trent Embankment to Tooting Bec Common and London’s green squares, I have appreciated the subtle contribution that these grand trees provided to my well-being – simply by just being there to accompany my walks. Several years later, outside of London, it was the majestic horse chestnuts on regular strolls through Blackbirds Moor in Boxmoor that grabbed my attention. These beautiful trees had been planted to celebrate Queen Victoria’s diamond jubilee in 1897.

I will also never forget the ancient Major Oak in Sherwood Forest, which is claimed to be the oldest oak tree in Britain, estimated to be around 1000 years old and so large that its branches are propped up by supports. The Major Oak is a bit of a celebrity tree but ever since my visit in the 90s, I have developed a real love of oak trees. It’s not just the quirky shape of the oak leaves or the cute little acorns. To me, oak trees feel like wise old guardians of nature and witnesses to the passing of time that can be marked by decades and centuries.

As I give an imaginary salute each time I pass the veteran oaks near my home in Suffolk, I wonder what they meant to the generations of farmers who worked the fields that they once lined before becoming part of our housing development. Were they also noticed and appreciated by those who passed by in their horse-carts, on their bicycles or in their new automobiles? What about the US Air Force personnel who flew out on their military missions from the nearby airfield during the Second World War? Did they salute them too?

The Abbey Gardens in nearby Bury St Edmunds also plays home to some wonderful arboreal characters, taking it in turns to showcase their splendour throughout the changing seasons. A walk alongside the grand limes that line the roads in the town’s neighbouring old churchyard is another experience that’s worth every footstep, especially on a sunshine filled day where the leaf canopy sparkles with beautiful light green hues and the air is filled with the sweet smell of the blossom.

There is a lime tree in our own back yard. It was once part of the street scene landscaping just outside our house but was damaged when it was young, hence being replaced by contractors who offered it to us for transplanting. To my delight it has flourished and, along with the eucalyptus that our eldest son helped to plant when he was aged two, it has become a prominent feature of our now 18-year-old garden.

That lime tree is also a stage for a local robin that sings from the top branches, undisturbed by its audience of wood pigeons perched on the thickest branch several feet below.

Trees have played a huge part in my family memories. My only wish is that our own family trees had been big enough for my own children to climb, just like that holly tree of my childhood. Luckily, they had plenty of opportunity to stretch their climbing legs in the woods close by.

There are so many more individual trees I could have listed here, including those that contribute to the grandeur of National Trust’s Ickworth estate or another local West Suffolk jewel in the form of Nowton Park.

It just shows that the more you ponder on the trees that have provided fun, shelter and comfort or have provoked awe, wonder and well-being, the more you will be surprised how many have been planted in your memory.