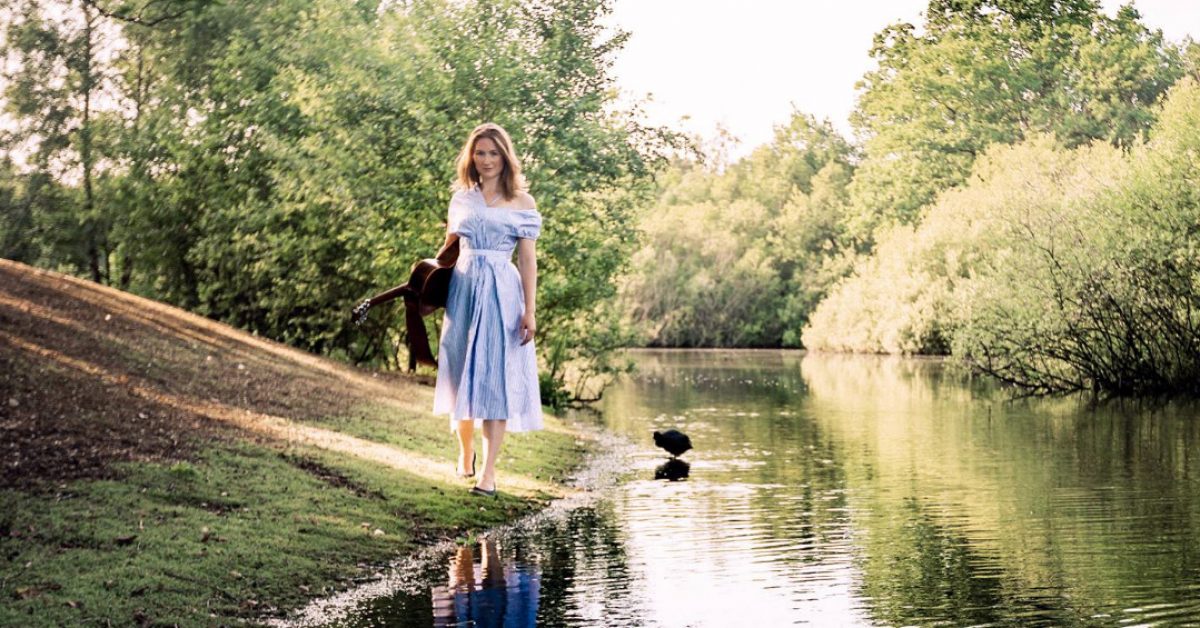 “Her pensive and positive songs exhibit a clarity of both thought and expression” say Living Tradition Magazine and “Her voice is incredibly clear and delightful and in many ways ahead of it’s years” says Folk Phenomena; having attended a good handful of her concerts, our Simon and Tracey West couldn’t agree more.

They caught up with Saskia earlier today for a spot of homemade vegan lasagne ahead of her performances at The Pilot Boat and The Marine Theatre and also to organise the carbon offsetting of her latest album, ‘Night and Day’.

“At the moment, it’s currently a 10 or 11 track album, we’re still deciding”, Saskia giggles, bursting with excitement, as all the hard work preparing the album dissipates and the launch is suddenly in sight.

Aside from being a great artist, she also shares our deep passion for looking after the environment. While her album was being recorded and mixed, Saskia became ever mindful of the carbon footprint it was generating and as she already knew about our reforestation work in Kenya, taking the necessary steps to offset it were simple.

Saskia adds: “I spoke to all my band members and collected the information about the journeys they took while we made the album. I nailed it right down to the make of the car they drove, or the mode of public transport they took. I also worked out the studio time that was taken and with Simon’s help, looked at the actual production of the CDs too and their transportation costs. It has been a really positive thing to focus on and I want to encourage other people to think about their carbon footprint and to plant some trees – it’s not as expensive as you might think and it just needs to be done!”

Tracey explains: “It presented us with an interesting challenge to find out what ‘Night and Day’ created in terms of its CO2 and it was a pleasure to help Saskia sort it out. In time, the carbon that her bit of forest will lock in, will more than cover the footprint from the album and its creation, which is great news. It means her project has not only mitigated the carbon produced, it’ll deal with somebody else’s carbon too. To be honest, this is the only way we are going to be able clear the sky and make a proper difference. Almost every action we take as a species has a carbon consequence; humans need to take full responsibility for their own CO2, and deal with some of the historical stuff up there too.”

According to a handful of reliable sources, the average carbon footprint for a person in the UK is around 10 tonnes. 40 trees would buy carbon neutrality for the average Joe or Josephine at a cost of £100 * click here if you would like to join the other esteemed members of our 100 Club.

Simon adds: “I think there’s a definite shift in public perception about carbon offsets. I’m happy that our reforestation work goes the extra mile and people make environmental investments with us because it also creates social benefit for our communities in Kenya, and we build classrooms too. We do far more than assuaging the guilt created from everyday living and we’re able to give our donors assurance that they’re making a difference because we collect the GPS coordinates of the trees and monitor them; our work is easily verifiable – that matters these days.”

Saskia’s album will be available to buy on her website from the 27th October. She’ll be launching it in London that day, then heading to Bristol to have even more fun doing it all again on the 28th. Be sure to catch the trailer at the end of the short video above!

If you’d like to have an informal chat about offsetting your projects, drop us a line.