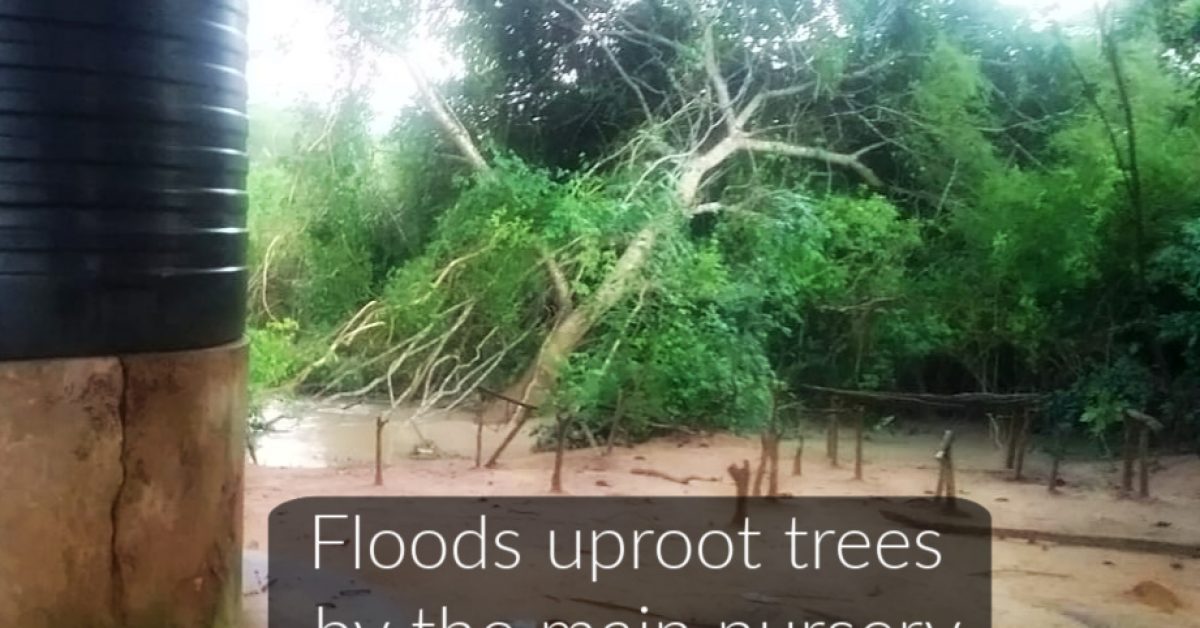 There have been several points over the past few weeks, when it has been almost impossible for our Team to sellotape a smile onto their faces. Don’t get me wrong – there has been an awful lot to be happy about. We’ve hosted some incredible fundraising events recently, every one of them a convivial affair with amazingly supportive people and the really good news is they’ve raised around £3,000.

However, while we’ve been on the frontline of fundraising, the people living on the frontline of climate change in our tree planting communities in Kenya, have twice been up to their waists in flood water and other assorted chaos from extreme weather events.

A period referred to as the short rains (intermittent rainfall from late October through November) has been anything but. A short while ago, the BBC’s Weather Department posted a video explaining why the floods across the whole of East Africa, have been so devastating. If you have a moment, do watch it. In summary, a series of landslides and flash floods – the result of violent, persistent rainfall – has claimed the lives of over 250 people and displaced around 3,000,000 people in Africa over the past few weeks. At least 125 of those deaths have been in Kenya.

According to a report published at the end of November on ReliefWeb, more than 160,000 people in Kenya, including nearly 18,000 who are displaced countrywide, have been affected by floods or landslides since the onset of the short rains in October.

The knock on effects have been felt throughout Boré, one of our main planting areas. Chaos has reigned, as vital, staple crops grown by the community we work with, have been ripped out of the earth and ruined.

We’ve sent over emergency funding for new seeds for the Boré farmers and tree planters, and in kind return for the assistance, the community will do what they always do for us: bless them, they’ll plant more trees.

The UN Office for the Coordination of Humanitarian Affairs confirmed recently that Kenya was already facing increased hunger prior to the floods, with 3.1 million people projected to be in crisis and emergency levels of food insecurity since October, according to the latest report from the Integrated Food Security Phase Classification.

Food and water security across Kenya is dire and it’s getting worse.

Recently, we heard further heartbreaking news about Anna Nduku, a 19 year old heroine who selflessly tried to save the life of a man as he clung desperately to a bridge under construction, as the waters rose around him. Anna heard his cries, ran to his aid but sadly fell into the raging Kandisi River on the outskirts of Nairobi. The man survived but the river claimed Anna’s life. The Meteorological Office say there’s more rain on the way and the only advice coming from the Kenyan government, is move to higher, safer ground: that’s easily said and for many, almost impossible to do.

Another story from early December, is of Mr Musila in Thika town, who explained that flood waters came in suddenly while he was fishing from a small patch of land in the middle of the river. A quick look at the water in this accompanying video, shows just how dangerous these fast-flowing waters are. Of course, it’s not only water the villagers have to contend with. These floods are also rapidly transporting crocodiles and other predators too.

The Sabaki-Galana River flows from Nairobi, across country, right through our tree planting area in Boré and eventually out to the Indian Ocean at Malindi. All manner of wildlife and human victims, have been carried along and that floodwater has devastated Boré on at least two occasions for several days at a time.

Just outside Malindi on the bridge crossing the Sabaki River, you’ll often see a herd of hippos; they’re definitely not a bunch of creatures you want to be caught in the water with. Floodwaters are also increasing the amount of mosquitoes, who are ready to infect an unwitting victim with malaria, in the blink of an eye.

Thankfully, no deaths have been reported in Boré as yet. Whilst the rainfall was bad it wasn’t devastating – it was floodwater from upcountry that came hurtling down the river that caused the majority of nightmares on this occasion.

The Mothers of the Forest Permaculture Garden took a serious beating, but thankfully, due to its sound design, only half of the crops were ruined. Eva Jefa reported: “We lost almost half an acre of kale, spinach, eggplant and amaranthus but we are grateful that all the tomatoes survived.” All efforts are now being put back into repair, restoration and replanting.

The floods certainly gave the Boré community a knock back but we feel it’s important for us to bring you news of the good times and the bad. The Mothers of the Forest sincerely appreciate your encouraging comments on their Facebook feed. Eva, Alex and Michael keep them well informed and every uplifting sentence from their supporters, thousands of miles away, is worth its weight in gold – thank you.

We hope to write with better news about the recovery from these incidents and all supporters, please accept a collective thank you from everyone on the ground in Boré.

Your kind contributions are quite literally, keeping them going.