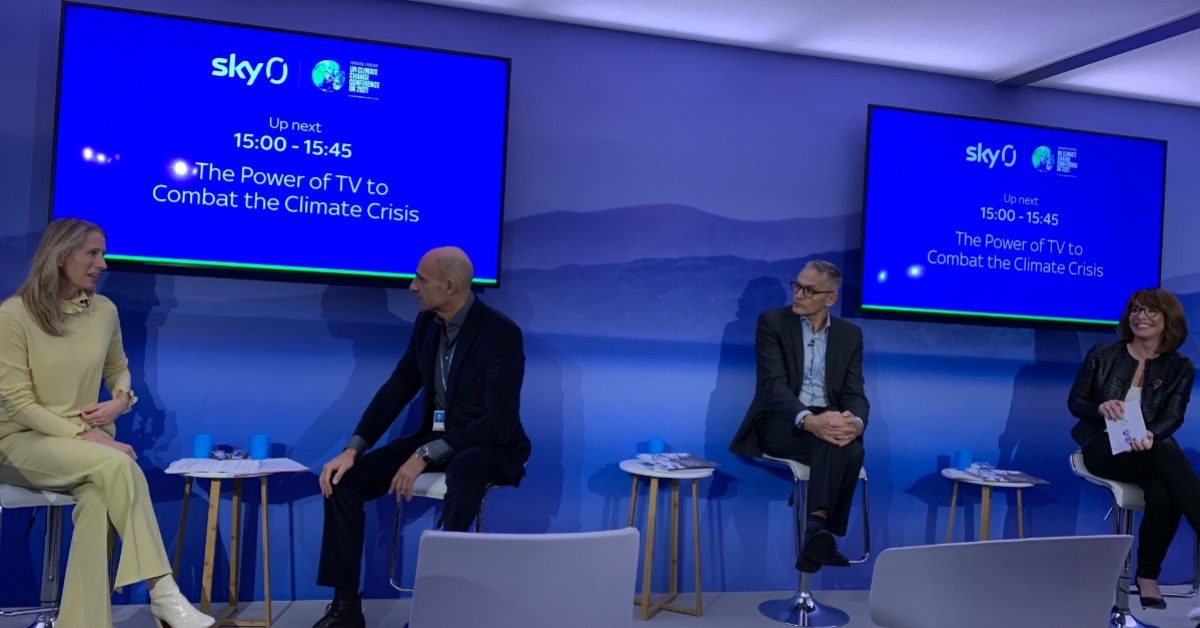 Can the Power of TV Actually Combat the Climate Crisis?

A recent study created for Sky from The Behavioural Insights Team has found that there is evidence television can make a difference in our choices. No surprises there. What’s encouraging is that this data is now purportedly going to be used to bring awareness, give knowledge, and help with future actions to help combat climate change.

‘The power of TV to combat the climate crisis’ was therefore the topic for Monday (1st) afternoon’s talk at COP26 in The Blue Zone, at The UK Presidency Pavillion. Speaking were David Halpern, Chief Executive of The Behavioural Insights Team; Dana Strong, Group CEO, Sky; Mark Strong, Actor and Executive Producer of Sky’s series Temple and Kay Burley of Sky News.

Sky are aiming to become net zero by 2030 and with this new evidence that they can help guide people to more sustainable choices, they realise the responsibility they have to help give viewers informed choices through documentaries, news, drama and advertising.

Through their output they have the power for change, the power to help tackle the climate crisis, the power to nudge viewers toward greener choices, all through working narratives into broadcasting.

The survey, which took place in the six country’s in which Sky broadcasts, found that one in three people have already made changes, 63% now think we need to make that change and surprisingly just 20% were fully up to speed with recycling,

It was good to hear that this media giant is calling for collaboration, realising that they can’t tackle this alone. Broadcasters nationwide need to play their part; they have a responsibility to inform. Using ‘choice architecture’ they can influence people’s opinions.

The Word Forest Organisation has plenty of positive impact stories to inform and inspire. As do multitudes of charities working across the world. Media outlets that enter millions of homes should be including stories of sustainability and hope as standard, it should be the new normal.

It was encouraging that panellists actually wanted to raise awareness, to normalise green onscreen, rather than knowing they needed to.

When asked whether the government has been engaged, Sky are apparently inviting the government, the business community and the finance sector to have dialogue.

A promising start for the first Monday of COP26. If you’ve got an inspiring sustainable story, now is the time to get in touch with Sky. We certainly will be.

Sue Jueno and The Team

PrevPreviousNo-fly Filming
NextInterview with Dave Harland of the Eden ProjectNext