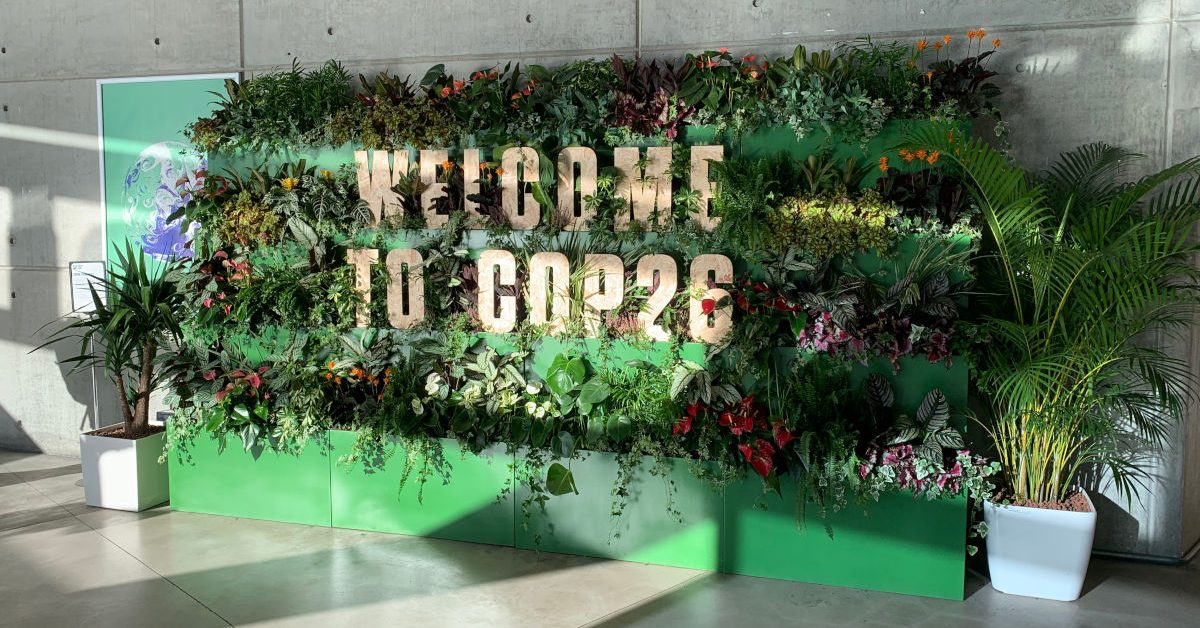 COP26: What to Take In and Take Out from Week 1

We’re already halfway through the COP26 conference – it’s gone SO fast! If it’s been hard for us up here in Glasgow to keep tabs of all the major achievements, announcements and positive solutions we’ve found, then no doubt you’ve found it hard back at home!

So, with that, here’s my COP Week 1 Round-up: 3 take-in’s, big news from the conference, plus 3 take outs, initiatives that you can get behind in your own life to act to address the climate crisis.

This will aim to dramatically scale and speed up the development and deployment of clean technologies, and drive down costs, by 2030. Countries that have signed it include the US, EU, China and India, and the Agenda will target the five sectors that release the most carbon emissions: power, road transport, steel production, hydrogen production and use, and agriculture.

The agreement, with signatories including China, the US, and Brazil, includes ~£14 billion of funding, which will be used to restore degraded land, and support indigenous communities to protect forests and mitigate wildfire damage.

Tackling deforestation is key because land-clearing by humans accounts for almost a quarter of global carbon emissions, largely deriving from clearing areas for agricultural products like palm oil, soy, and beef.

US President Jo Biden announced a multinational plan supported by 90 countries that will address and control methane emissions, aiming to reduce these by 30% from 2020 levels by the end of the decade. The alliance includes half of the top 30 major methane emitter countries. Like carbon dioxide, methane is a greenhouse gas, but unlike the former, methane causes much greater levels of warming per molecule – it is 84 times more potent on a 20 year timescale than carbon dioxide. Major sources of methane in the US include landfill sites, abandoned oil and coal sites, agriculture, and leaky pipes.

WWF and the British Antarctic Survey have launched a new research project aiming to document the impacts of climate change on walrus populations across the Arctic. The most important part is, YOU are key to its success! As a ‘citizen science’ project, the groups are relying on individuals across the globe to head to their website to identify and count walrus in their satellite images. So head to the Walrus from Space website now to count walrus, and contribute to studying the impact of climate change on our wildlife.

Here’s something I learnt from my time at COP this week – washing your hands with warm water has no benefit to your hand hygiene. ‘Reckitt’, a major personal health company who own brands like Dettol, have been at COP26 as a principal partner, highlighting how small actions by individuals can add up to huge impacts. If everyone in the UK used cold water instead of hot to wash their hands, it’s estimated that across a year this could reduce carbon emissions by the equivalent to 3.3 billion miles driven by a car.

Although everyone is talking about COP right now, it’s easy to feel isolated from the discussions – much of the conversation has been focused on decision-makers in closed-door rooms. You likely feel disillusioned by ‘leaders’ offering empty promises. This is where ‘Call Your Mother’ comes in – a space created for people to talk about how they’re feeling at this time, and to hear from others doing the same. What would you say to Mother Earth if you could? Share your feelings via text, audio, or video, on the Call Your Mother platform, and reflect on how our feelings are precursors for action and a positive mindset.

Jake Causley and The Team