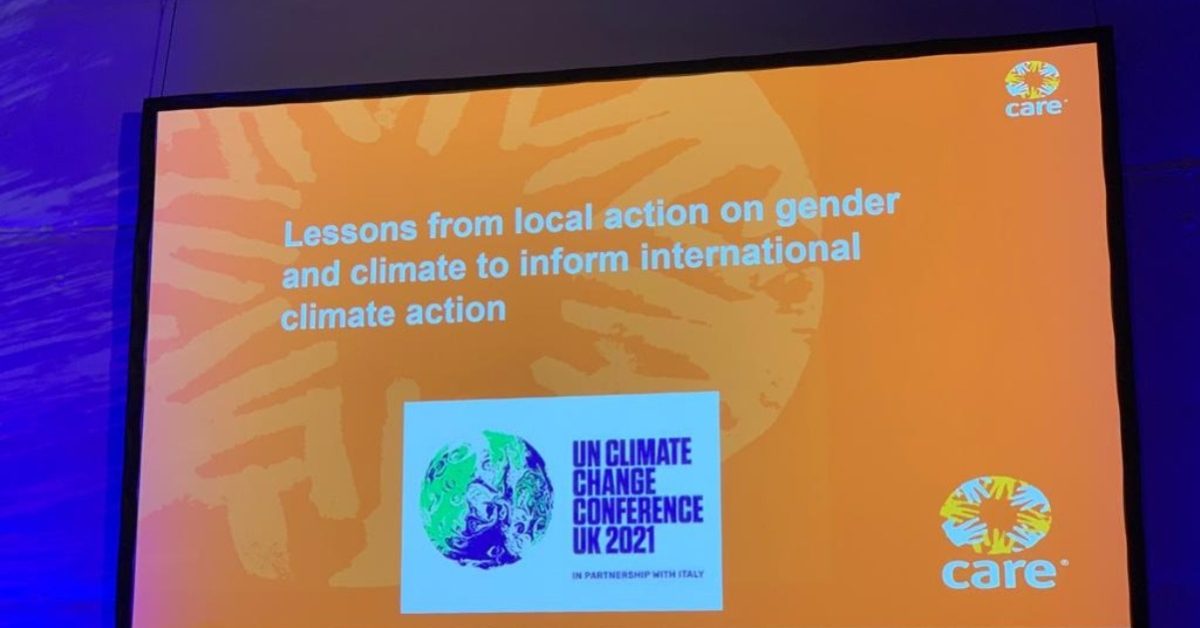 9th November was Gender Day at COP26 and Lucy and Sue attended an inspiring session led by African women, predominantly from Kenya, entitled ‘Women leading: lessons from local action on gender and climate to inform international climate action’. it was organised by Climate Action Network Europe and Care International.

The first panellist, Patricia, representing Environment and Climate Change Governors in Kenya talked about the importance of including women and their voices in climate and cross-cutting issues, specifically in Makueni county in Kenya. She discussed the role of ‘Saccos’, which provide community funds or loans, that is, money to help with local restoration and garden projects. The majority of the women in these communities did not have the opportunity to either attend or finish school. They need finance to upskill themselves in order to look after the land for agroforestry or tend the fruit trees, since the men often move to urban centres to look for employment. This leaves the women attending to their homesteads. In addition, there is a cultural issue which prevents most women from owning land. It is imperative that women have the right to own land; it brings them a sense of identity and belonging. Access to climate finances empowers the women both for themselves and to help others.

Next, a Kenyan Representative from Care International discussed how women are powerful agents of change, giving the example that 70% of the tilling of land and agriculture production is done by women. Therefore it is paramount that women should be considered for leadership positions and at policy levels, both local and national, as “women need to be at the table”. There is a clear need for monitoring and evaluation, in addition to increasing climate finance towards gender specific channels and community action plans. She continued, “We must tackle the root causes of poverty whilst tackling climate change” and called for women to help implement their commitments. She described how women bear the brunt of floods, since they want to save things from their homes so they do not start from zero afterwards whilst struggling with children. With extended droughts, the walking distance to fetch clean, safe water for the home increased. The reality is that the cycle continues. Climate change mitigation needs to be led by the women in communities; to “move from talking into actions” and to ensure equal participation and leadership, finance must be provided.

The Head of Programmes from the Pan Africa Climate Alliance in Kenya spoke about the Alliance, which focuses on a variety of groups including: faith based, community based, NGOs, farmers, indigenous people, youth and women’s movements. These total over 1000 organisations across 48 countries – this was a powerful opening. She explained that a just transition, energy access and particularly climate finance are at the crux of what they do. Staggering statistics were shared, including the 1 billion USD that was promised annually but has never been received, to support these groups for their climate work since “Africa did not cause climate change” and the “African people and women bear the brunt of it”.

“Climate finance is not gender blind”, yet there are 1.9 billion people living in poverty; the majority are women. This is not being tackled adequately since there is a limited capacity amongst low and middle income countries. The Alliance is working in ten countries across Africa, including Kenya, on a county level, to access climate funds with a specific focus on climate finance tracking and gender tracking.

Additionally, a UNFCCC representative for gender from Nigeria focused on advancing the agenda of gender and climate, including what they want and need from COPs and priorities post COP with key demands. She talked about the importance of a fairer distribution of funds and in particular the need for “climate funds to be 100% gender responsive”, also requiring experts that provide advice and information to governments and institutions, including at local levels. Women are demanding more just climate and gender finance.

The needs of local women are simple but most of the time they don’t have a profile to raise them. Women need to be given small grants initially that then expand and grow since the bigger grants still go to men. “We as women are very vulnerable and we do all the work.” The private sector does not want to invest in vulnerability or disproportionate business – what interest is there? “We need to turn vulnerability into profitability” and turn it around through innovative ideas. It is paramount that we try to understand and listen to women in local communities, to learn how they operate and their adaptation processes and finance mechanisms. The public-private partnership working with communities must ensure their funds go back to the women in communities, which adds value. Africa is still not getting the funds it needs, let alone the local woman in the community. “We must listen to women and local communities” and help them in finding the solutions together to meet the SDGs.

When asked what we can do, as privileged people from the North, the answer was simple: “Solidarity”.  We have the same concerns and similar frustrations, so we must build solidarity around these issues. Stand with us outside, no one is looking at where you’re from, solidarity on the streets and in alternative spaces.

What can you do to ensure the money that was promised is received by the Global south? Take action; assist in the giving, if possible, and lobbying for that money, which includes pushing the Government for ambitious and necessary amounts that are not just on paper but implemented. Ensure the UK stops the emissions that are affecting those that are far away and helpless. We need governments to do the planning, including financially, ahead of time for preventative measures; disasters affect emotions and mental states, particularly women since they take care of the family. Importantly, we need alternative voices at the table. Additionally, we must address the biggest elephant in the room – the private sector.

I want to leave you with this powerful statement by two of the women on the panel: “We have so much that we can do together and we are all in one ship; whether we are the upper deck or the lower one, when the ship sinks we all sink.”

You can watch the full event here https://www.youtube.com/watch?v=FAGI2SyrovQ

Lucy Meredith and The Team