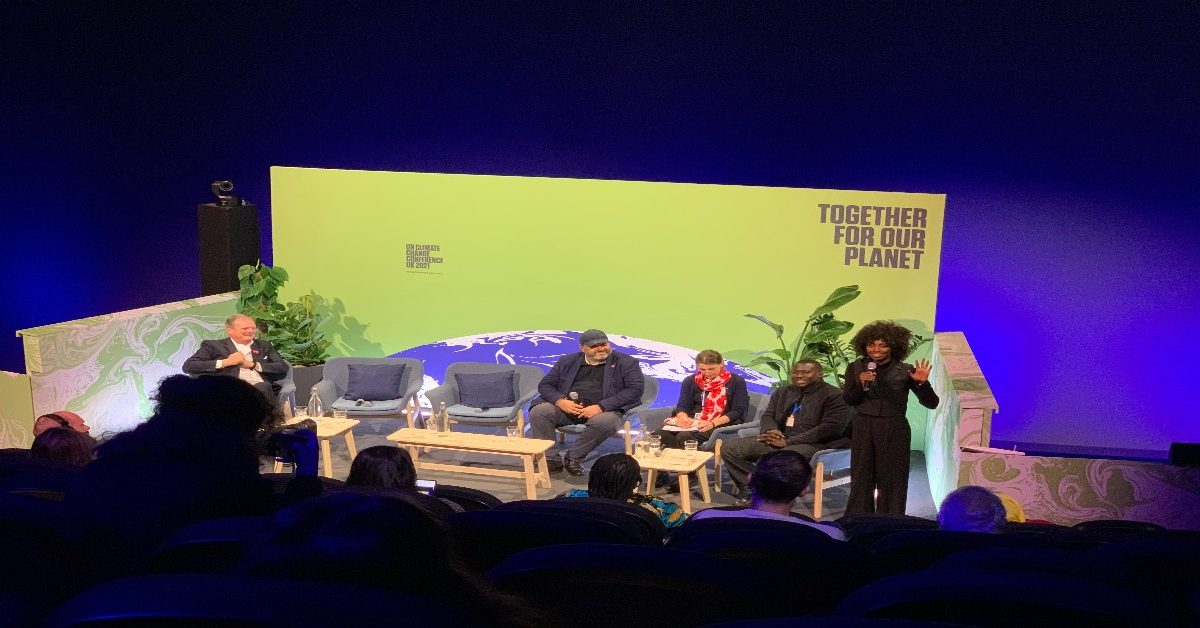 The Great Green Wall – The Line That Unites Africa

The Great Green Wall initiative caught my attention a few years back, so I was very keen to attend a showing of a documentary focused on the inspirational project during COP26 in the Green Zone.

Introduced by Inna Modja, artist and activist, it follows her music-filled journey across Africa, from Senegal to Ethiopia along the Sahel. Inna meets various artists along the way, with whom she collaborates to create music inspired by the different regions. An album is planned, with proceeds going to the project.

Inna also meets extraordinary communities and individuals along The Great Green Wall route, listening to their stories and struggles of being on the front line of climate change. She visits a school and hears from children who have lost their families due to drought and conflict. The documentary is hard hitting and you realise why, on so many levels, this project needs to be realised.

As background information we hear that in 1985, Thomas Sankara, Burkina Faso’s then president was ahead of his time in recognising that climate change and desertification were the single biggest threat to the wellbeing of Burkina Faso’s people. “The desert is at our gates, it’s already upon us, ready to engulf us,” he warned. In order to avert disaster he launched a massive tree-planting drive to ‘regreen’ the country, “Step by step, tree by tree, we will create this great park of 10 million trees,” he said. Two years later, Sankara was assassinated by soldiers in a military coup, but his vision of a ‘wall of trees’ holding back the encroaching desert has taken root in the pan-African project.

The African-led project aims to grow an 8,000 km new ‘World Wonder’ across the continent to combat climate change, halt desertification and change lives by creating thousands of jobs. The UN Convention to Combat Desertification is one of the key partners in the initiative, and you see Inna at the headquarters of the African Union, and the United Nations, where she advocates for the project to fight climate change in Africa.

Originally conceived to be a line of forest across the continent, the planting is now more of a mosaic of plots of land that will eventually meet. The first trees were planted in 2008, with the very first seeds from Kew’s seed bank making sure the restored forest would be native, indigenous and drought-resistant. However, with only 16% of the 8000km planted, the project needs huge input to reach its target by 2030.

Climate change has caused major disruption in Africa. With 80% of people needing agriculture to survive, those that lose the ability to work the land are forced to migrate, or in some areas are caught up in conflict. Lake Chad, which covers Chad, Niger and Nigeria has decreased by 90%. Sixty million people in Nigeria have been affected by the changes. Jobs lost. Livelihoods taken away. It is estimated that 60 million people are expected to leave the continent by 2050.

The Great Green Wall can change this. It has the capacity to bring work – approximately 20 million jobs – restore lands and make them productive and help food security. It will help combat climate change, not just for Africa, but for the whole globe. Once complete, the Great Green Wall will be the largest living structure on the planet, 3 times the size of the Great Barrier Reef.

It’s clear that Inna’s approach – to bring awareness with music, to help to change the mindsets of youth, to connect with the communities – works. The work that’s already been carried out by The African Union, The UN Convention to Combat Desertification and countless charities and NGO’s shows the movement needs to be a respectful global partnership. Together we can help this project realise it’s potential.

Find out how to become involved here.

Sue Jueno and the Team