You wouldn’t believe the difficulty I’ve had compiling extracts from my red-dust covered journals, following our monitoring and evaluation trip to Kenya in February.

Despite the fact that I’ve received nothing but consistently supportive encouragement from my colleagues to scratch out a few creative words, I’ve also been paralysed with a bizarre form of writer’s anti-block; it’s not that I don’t have any words, I have too many – that’s the problem!

The lead up to leaving for Kenya for me, was thrilling and daunting in equal measure. I checked the countdown timer on my phone at least daily, for almost six months and it was a wonder I hadn’t used up an entire human being’s worth of adrenaline doing so. I avidly devoured all the progress reports received from Alex Katana, our Project Manager over in Boré, but I couldn’t wait to see what we’d achieved over there with my own eyes. 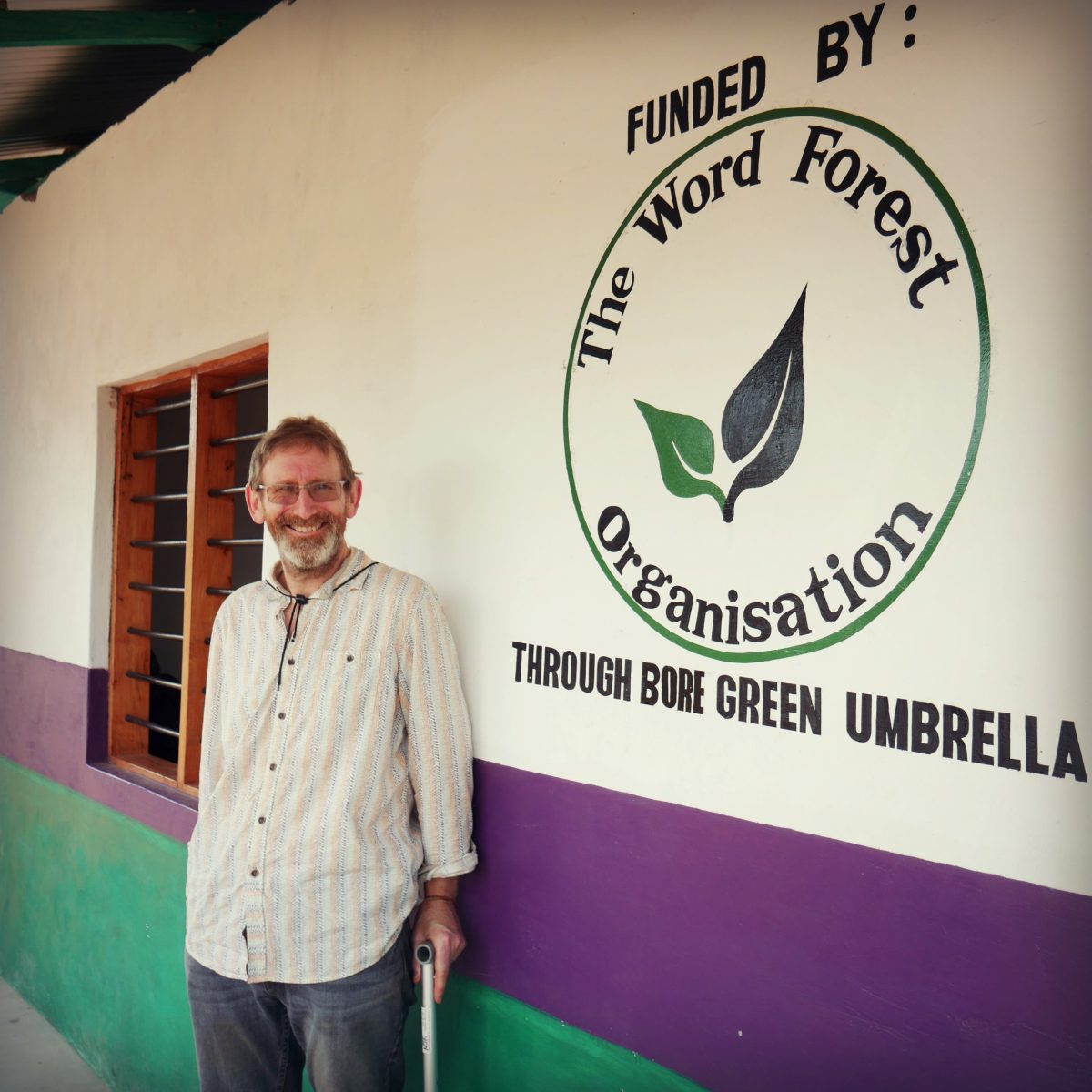 As well as checking the health and well being of the trees we’d planted and meeting the students and teachers from the schools we’d help to build, I also needed to choose the next half dozen schools we’re going to build; I had no idea what an infinitely quandrous spin that would leave me in, after I had made those decisions.

Once we got home, it took me ages to mentally unravel and get into the groove. I quite literally had half of Africa still ruffling around in my hair – which I blankly refused to wash out of some garments – and I’d often sit at at my desk wearing some of my favourite grubby clothes from the trip, as if they were memory-filled comfort blankets.

I missed Kenya’s smell, taste and feel from the minute I got home. I missed her people too, but I was also physically and mentally mangled, plus I had a stack of tasks to deal with that had mounted up relentlessly during my absence. My biggest challenge was going to be disseminating the information I’d gathered and processing the 196Gb of video and 1,626 high resolution images; I hadn’t a clue where to begin and now, despite the fact that I’ve combed over the material time and time again, I’m not sure I’ll ever be able to do it justice.

I’d have sold an aunt to have taken a documentary crew with me, then I could have applied 100% of myself to the task in hand, instead I had to content myself trying to be a Jill of all trades; CEO, photographer, filmmaker, producer, interviewer and more. 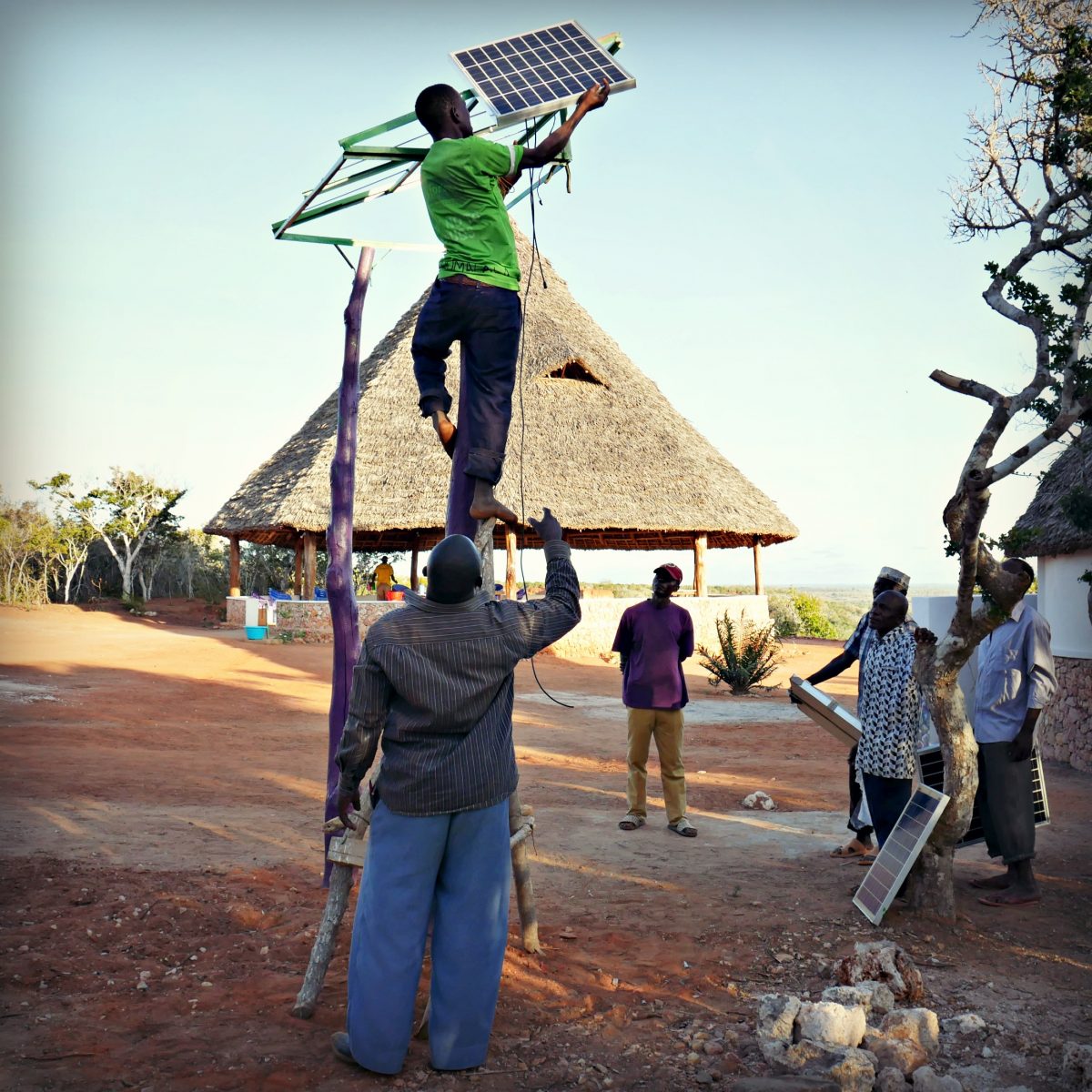 To be honest, I’d have lapped up the chance to get online and write and upload more while we were in Boré but our schedule was so jam-packed, you couldn’t slip a bus ticket in between the appointments. Add to that the daily complexities of ensuring we had enough power from our small solar array to run laptops and see after sunset at 6:30pm, layered with the careful budgeting of limited access to expensive bandwidth. I decided it was easier to keep our social media platforms fed with photos and the odd live broadcast and to record the highlights of the day using good old-fashioned pen and paper, ready to decant on my return and here we are.

I’m finally ready to tell the story of how the wedding forest my husband Simon and I had planted in 2012 and the writing contest I founded in 2014, jump-started me into creating this environmental charity and what’s occurred as a result. The only question is, are you ready to read it? If you get to the end of my journal and don’t feel a compulsion to buy at least a dozen trees, I’ll have done a disservice to the amazing people of Boré, to Kenya, to Africa and to our Mother Earth.

Towards the end of 2017, I was absolutely blown away to receive a donation of ring-fenced funds allowing two of my Trustees and I to undertake a monitoring and evaluation trip to Boré. When you run a charity, you have to take credible, accurate measurements of the impact of your work to show your donors and corporate partners, and quite rightly so. The only issue is our beneficiaries are 4,493.84 miles away as the weaver bird flies, give or take; proper evaluation would need a thorough visit via an aeroplane.

During the 2½ weeks Ru Hartwell, Simon West and I spent in Kenya, we measured our impact with bells on. We landed in Nairobi late Friday night on the 16th February and after a tumultuous and sweaty 2 hour wait at customs, eventually offloaded most of our 124 kilos of luggage to a lovely man called Victor, for onward overland transportation to Boré. We made our way to the Green Belt Movement’s Langata Learning Centre in Karen and slightly frazzled around my edges, I prepared to host a tree conference the following day. I’ll tell you all about ‘Clear the Air: reforest Kenya 2018’ in a later post…

Two days later, we flew into Malindi, Coast Province and after an indescribably thrilling ride in the back of an 18 year old wannabe jeep, I finally realised what the phrase MMBA really meant. As you journey across ‘Miles and Miles of Bloody Africa’ you develop a greater clarity of many things; drought, extreme heat, poverty, simplicity, isolation, resignation and perhaps bizarrely, happiness. As the thickness of red road dust increases – as do the treacherous bumps and ravines that could swallow a man whole on the sides of the tracks pretending to be roads – your understanding of food and water insecurity for local communities, becomes ever more founded.

I had several contemplative ‘Oh shit’ moments, driving over bridges that should have carried us over bodies of water, instead they were lined with sand and weedy vegetation, violating the arid space. One was rapidly punctuated by a thud in the road so hard, I thought car was going to disgorge its guts into the chasm and leave us stranded by the copious cacti that seemed quite happy to live in this challenging location.

I got my first proper journalistic fix and tossed between shooting video, capturing stills and trying to write a few notes in my diary. NB: must remember to do more voice recording next time, my handwriting is appalling – I should have been a doctor.

We arrived at our final destination, the Boré Community Forest Centre, after a couple of hours of begrimed travel. We prepared to carry out our duties, whilst residing with the creatures and in the comforts of this amazing centre, which comprised an impressively positioned, traditionally constructed, circular accommodation block for 14 people. It nestled affectionately alongside a similarly sized communal building with the same round makuti roof but with open walls that invited a welcome breeze to pass right through it (as the days rolled on, I soon discovered this was the optimum spot to experience sunup or sundown with a simple revolution of 180 degrees in your chair and a cup of tea).

We were overjoyed to be met by several members of the Boré Green Umbrella Co-Operative, (BGU), our on-the-ground partners who implement our tree planting and classroom building. How marvellous it was to finally exchange an animated, “Jambo! Jambo!” with them all. We eventually retreated from the sun and returned to the main block, chose the rooms we wanted to sleep in, some of the walls and floors still slightly sticky with fresh paint and the solid wooden doors of which bore a skilfully carved piece of Kenyan wildlife. 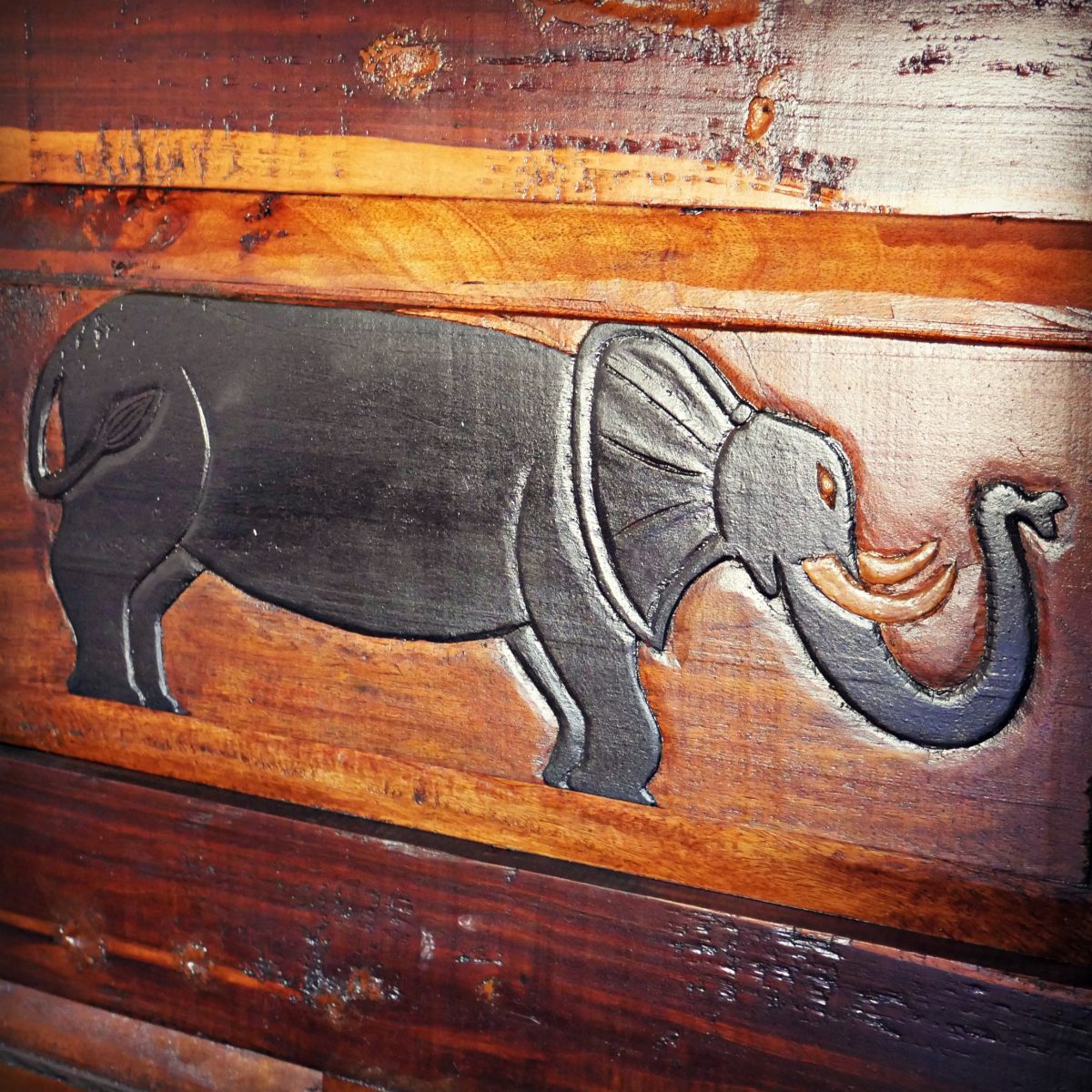 We unpacked and I unravelled, as I digested the undeniably enviable location of this incredible centre. It sits 3 degrees south of the equator, perched majestically on the absolute edge of a clifftop that delivers a jaw-dropping view out over a colossal natural depression. The land has literally fallen away to reveal a vast sandstone canyon filled with jagged gorges, layered with slices of pink, orange, white and blood-red crimson rocks. 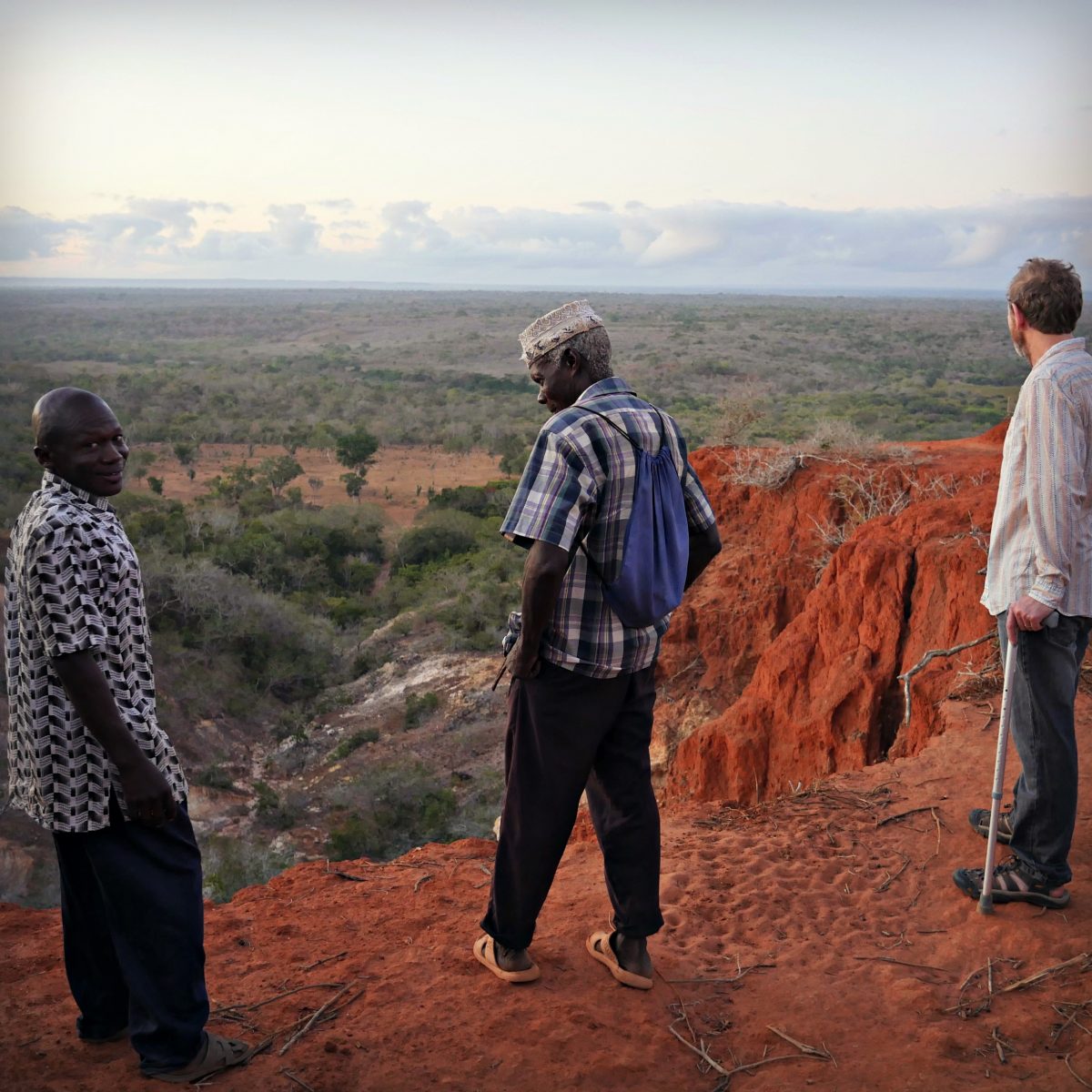 BGU members, Nelson, Tubo (aka Pirate), Edward and Musa, took Simon and I for a walk around the precipice and while they strode confidently up to the edge of the deathly drop, I had to wait a little longer to conquer my reservations. The local Giriama folk believe this is a truly sacred space and they call it ‘Nyari’, ‘the place broken by itself’. If you look up a tourist attraction just a few miles away called Hell’s Kitchen in Marafa, you’ll understand in a heartbeat how it won its name.

The Boré Community Forest Centre has been 11 years in the making and is now a prized community asset. I’m proud to say it’s the brainchild of our amazing Trustee and forestry expert, Ru Hartwell. Ru’s non-profit company, Community Carbon Link, was the organisation that Magic Oxygen Publishing used to plant the trees that resulted from entries to the Magic Oxygen Literary Prize, or MOLP as it’s fondly known, the only writing contest to plant a tree for every entry. Ru has invested blood, sweat and tears into many projects with the BGU over much of the last decade and his local knowledge is second to none; how blessed we are to have him in our fold and how thankful I was to have him beside me on the trip. 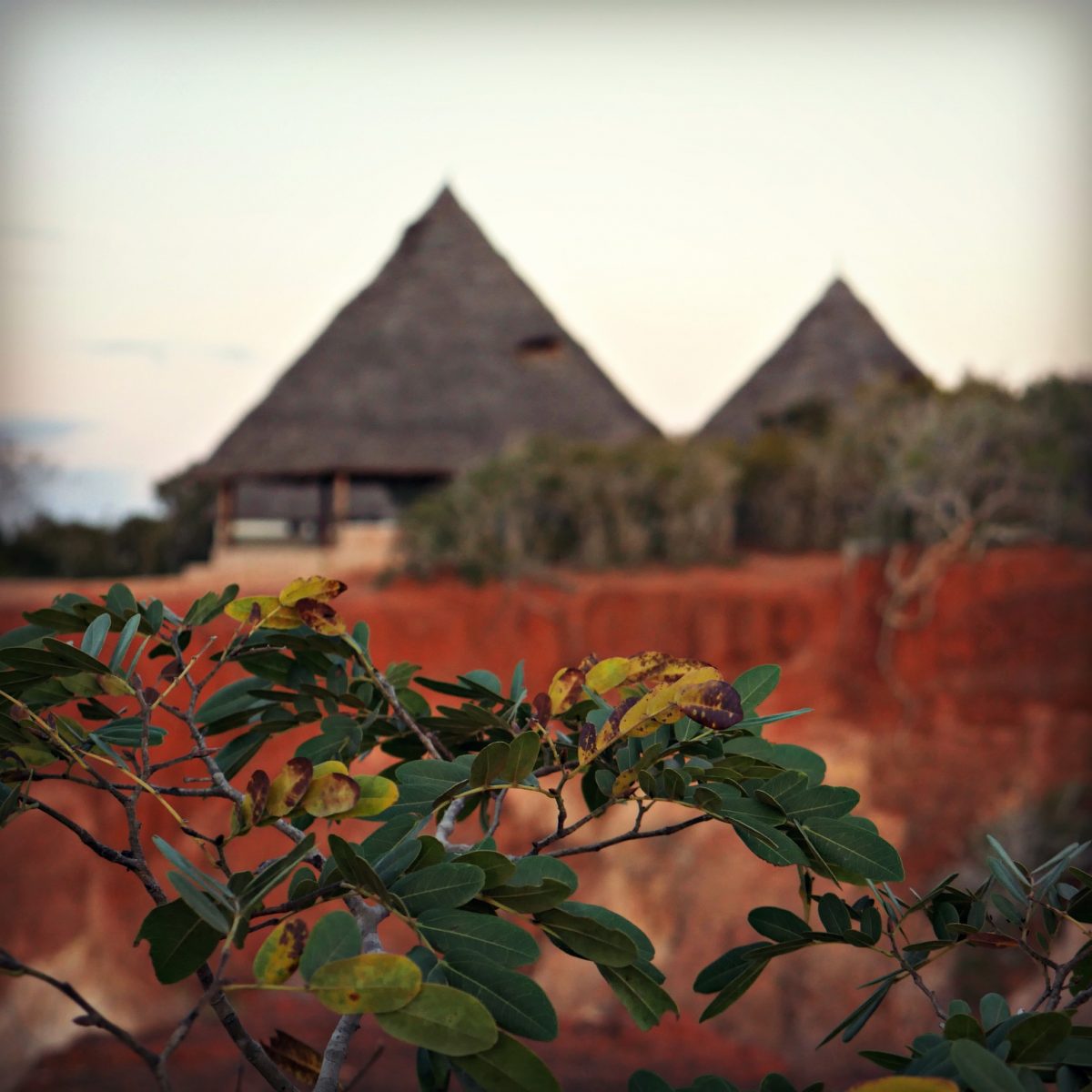 As the sun finally descended from the heavens on my first proper day in the wilds of Kenya, the sounds of the bush babies and other nocturnal animals filled the void the brightness had left. A brief, perfunctory shower with naturally heated water, cleaned me before I melted into my bed, but it only served to rinse Africa deeper into my skin.

I covered myself in a mosquito net and plummeted rapidly into the arms of Morpheus to enjoy the first of many deeply satisfying sleeps during my stay. No amount of education or discussion could ever have prepared me for the incredible adventures and heartache that were about to unfold. 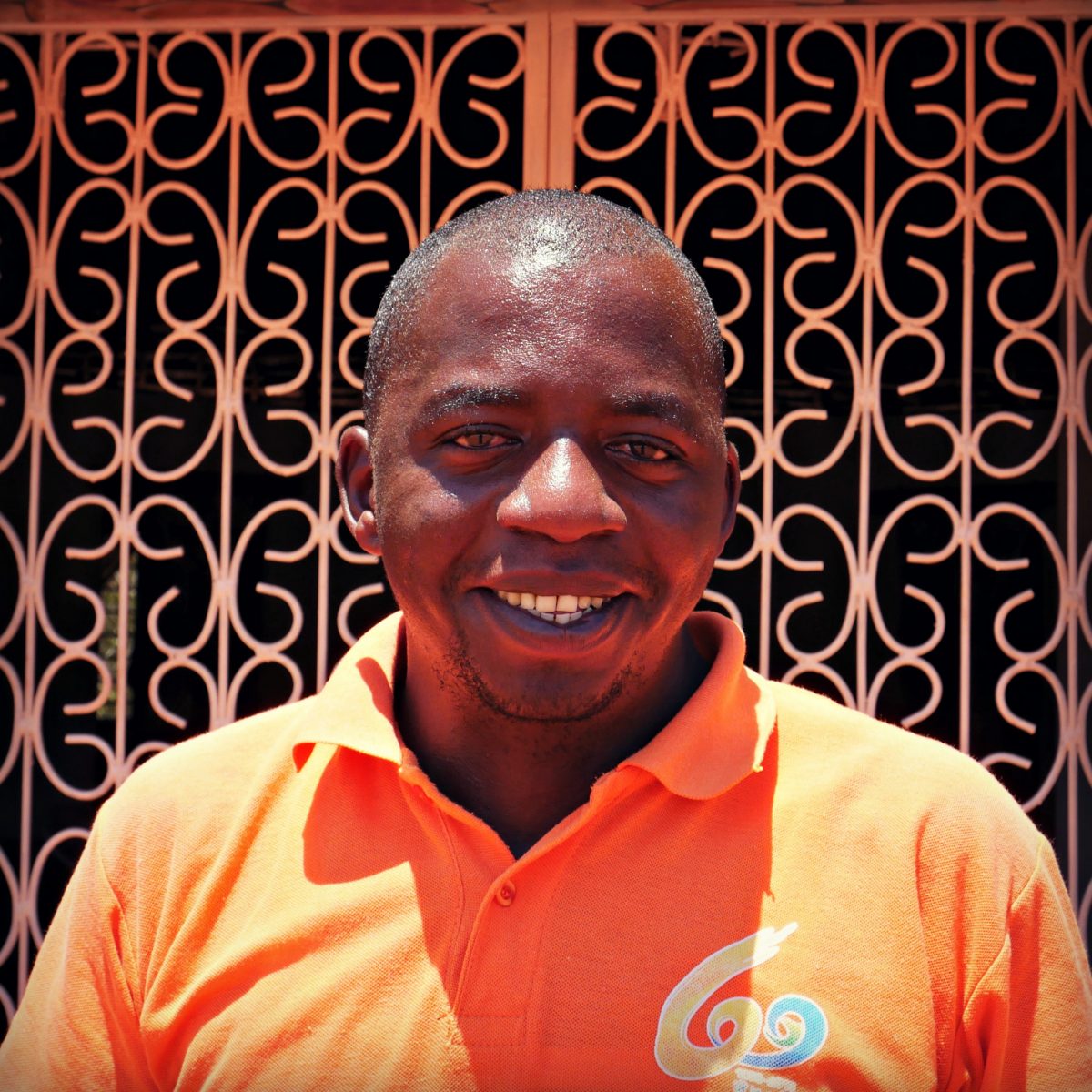 The Boré Community Forest Centre staff are headed by coordinator Edward Mwanyule, who took such great care of us from the moment we arrived.

It is all geared up and ready to accept (a) visitors who want to press life’s pause button and observe the birds and wildlife, and (b) students, researchers and volunteers who want to learn about sustainability on the climate change front line of tropical Africa.

See BoreForestCentre.org for more information and to book your stay.