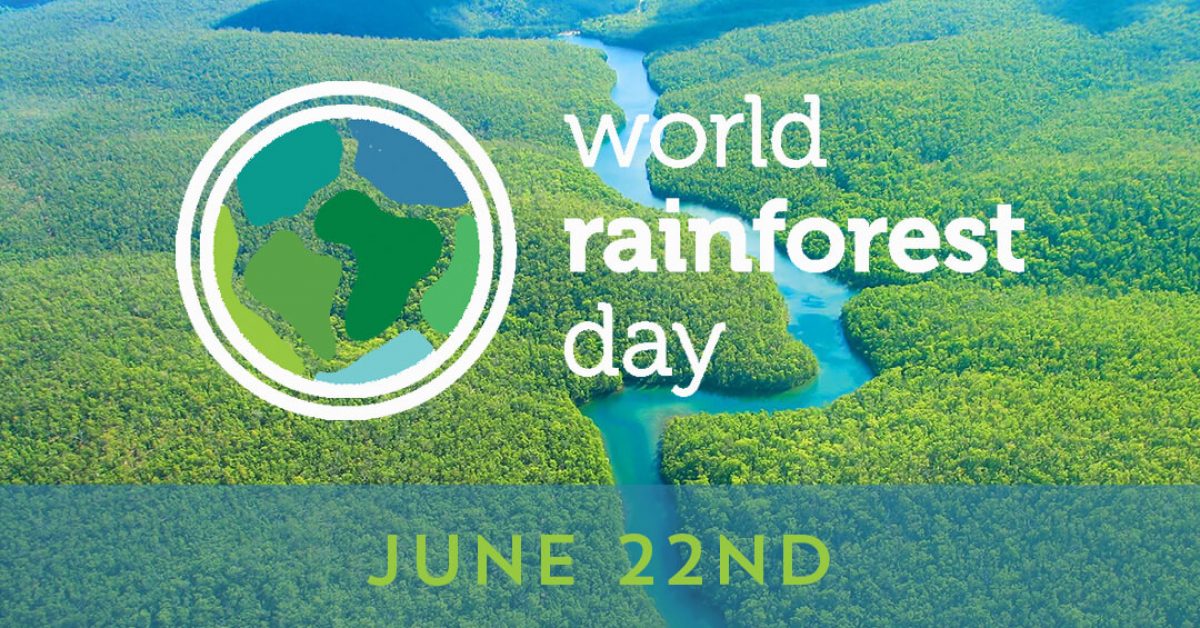 World Rainforest Day launched in 2017 not only to raise awareness and encourage us to take action to protect and preserve the forests, but to offer a chance to celebrate this wonderful resource.

While our forests in Kenya aren’t rainforests, deforestation has an impact on the whole planet, and the work we do here at The Word Forest Organisation helps to combat deforestation and its effects.

While the Amazon is by far the biggest, stretching across almost 7 million square kilometres of South America, there are many others across every continent except Antarctica.

Rainforests are home to an incredible array of flora and fauna, supported by the favourable climate and rapid recycling of nutrients.

We all benefit from the rainforests, as they play a massive role in stabilising the Earth’s climate and water cycle. It’s thought that up to 80% of our food originated in the rainforests.

While rainforests only cover 1-2% of the Earth’s surface, the trees produce 20% of the worlds oxygen, and are massive carbon sinks, storing an estimated 25% of the world’s carbon.

What are the threats?

Deforestation is a huge problem for rainforests, and we lose roughly 40 football fields worth every minute.

The more trees that are chopped down or burned, the more CO2 we release into the atmosphere, the more wildlife we endanger, and the more we put this incredible natural ecosystem at risk.

What contributes to deforestation?

Logging is the process of cutting down trees for timber, and much of it is done illegally through exceeding quotas and logging in protected areas.

It is estimated that 80% of timber exported from Peru is from illegal logging.

The rainforests are a valuable resource of gold, iron ore, copper, tin and nickel, among others.

Before these can be mined, the area must be cleared of trees, and in some cases, harmful chemicals are used, such as mercury, which is used to separate gold from silt. This remains in the atmosphere, pollutes water supplies and affects local wildlife.

Palm oil is just one of many crops grown in cleared areas of the rainforest. It can be found in a vast number of products, from food to fuel, and a lot of it is unsustainably sourced.

The soil, however, is unable to support the crops indefinitely, and new plantations are continuously being created.

Large swathes of the rainforest have been burned to make way for cattle pastures and soy plantations for livestock feed. As with palm oil, the soil cannot support the cattle for long, and farmers must create new pastures.

Hydroelectric dams have been built in the forests as a source of renewable energy, however, they affect migration patterns of wildlife and can worsen the effects of drought.

Roads are being built to transport timber and other goods throughout the forests, further minimising the size of the forests.

There are many impacts on both the planet and indigenous peoples from deforestation, however, here are some of the more prevalent ones:

Deforestation is strongly linked to climate change, and it is a vicious cycle.

The increased CO2 from not only deforestation, but the burning of fossil fuels is warming the atmosphere. This in turn leads to droughts, fires and tropical storms, destroying even larger parts of the forest, and releasing more CO2.

Trees are vital for maintaining the top soil, keeping it nutrient rich and moist. Once these are gone, the soil quickly erodes, along with sustenance for other forest flora.

It also makes the land prone to more flooding, which is a serious threat to both wildlife and humans.

It’s estimated that the rainforests are home to 50% of the world’s terrestrial animal and plant species. Removing the trees removes the habitats, endangering many species and significantly reducing biodiversity.

How can you help?

While tackling deforestation is a massive task, there are plenty of small things we can do every day do to help combat it.

While it may sound slightly counterintuitive, eating less meat and incorporating more plant-based food into your diet reduces the amount of land required to graze and feed cattle, as well as significantly reducing methane production.

With so much choice in the products we can buy, it’s relatively easy to find sustainably sourced products. Looking out for wood products that are FSC certified, and palm oil that has Roundtable on Sustainable Palm Oil (RSPO) and Green Palm certifications is a great start.

While not an exhaustive list, here are some of the charities that do incredible work to help protect the forests:

Consider supporting organisations like The Word Forest Organisation to help plant trees, and remove excess CO2 from the atmosphere. In addition, you can plant trees locally – each tree removes approx. 20kg of CO2 per year and in Kenya it can be as much as 50kg!

Paper products are incredibly easy to recycle, and re-using materials such as these prevents the need to cut down more trees. Goods made from recycled paper also require less energy to be produced, less emissions to be transported and create less waste.

Educate yourself and others

Finally, educating ourselves as to the vital role of the rainforests and the threats to it, the better we can make decisions to help protect it. Raising awareness enables others to be able to make better decisions too.

“Protecting rainforests is our most powerful tool to address both climate change and biodiversity, but none of us can tackle this challenge on our own. It will take all of us everywhere acting together. The United Nations has alerted us that we are in the middle of an unprecedented ecological crisis – this is a day where people can take action and be a part of a solution.”

To find out about other ways you can help, please visit https://worldrainforestday.org/ and be sure to tag #WorldRainforestDay #TakeABreath #ThankARainforest #BecauseTheWorldCantWait #TheForgottenSolution to help spread the word on social media!