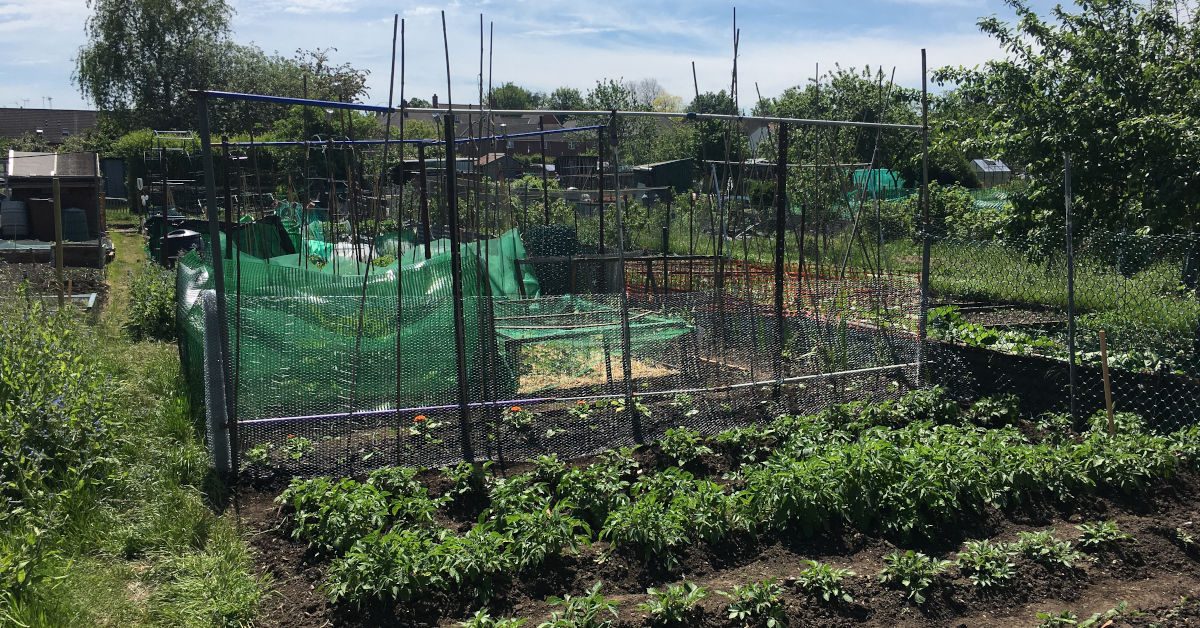 The sound of the blackbird’s song accompanies me as I fill the watering cans.

The glug of the water tank temporarily drowns out its chorus but it soon returns as I walk back to my plot, carrying these liquid weights. Sometimes it is replaced by the wind rushing through the tall trees.

As mindfulness goes, I am lost in the moment. These familiar steps back and forth, the swoosh of the water as it leaves the watering can and the dampness of the ground when water and soil meet. For a short while, this is all that matters.

I am fairly new to allotmenteering, having only taken on our plot during the half-term holidays of February 2020. I have my friend Alison to thank for influencing me, who during the summer of 2019 asked if I could water her allotment while she and the family were on holiday. After a few days of tending to the tomatoes, raspberries and blackberries and vegetables, I was smitten, so much so that my husband and I took the decision to jump two feet in and apply for our own plot.

Less than six months later our request was met by a space on an allotment that’s nearer to town, which suited us perfectly, not least because of its proximity to the town centre, but because it is also smaller than most plots, a quarter of the average size. This was perfect for our novice status. It even came with an old shed, a water butt and a walnut tree. It also had growing frames (constructed from scaffolding poles and other random metal components), a raspberry patch and some fully grown leeks, all courtesy of previous tenants.

At first, it felt daunting. The more we researched and planned, the more overwhelmed I felt about making decisions on what to grow. Aside from flowers, we had only ever grown a few tomatoes, a bag of potatoes, some herbs and a few salad leaves.

Action helps banish overwhelm, so we started to dig and began with planting seed potatoes and sowing beetroot. We also planted gladioli as the first flourish of flowers to line our untidy boundary fence.

We were told to stay at home. So we did, not emerging until several months later. When the allotment should have been plentiful with produce, it was mainly awash with weeds. At least we had evidence of raspberries, potatoes and gladioli and were very grateful to our allotment neighbours that live close by for watering them during our absence.

That’s the thing with allotments. Not only do they help grow food but they sow the seeds for community roots too.

Twelve months on from our return to the abandoned plot, this piece of land is starting to flourish. We have onions and shallots established, pea shoots and beans climbing up the metal growing frames, potatoes growing in their ridges, tomatoes, courgettes, cucumbers, pumpkins and squashes in flower. The broccoli, sprouts and cabbages are beginning to stand tall over their salad leaf counterparts and the parsnips are developing good growth, as are the strawberries that are now bursting with colour and summer flavour. This week I also planted celery seedlings that another allotmenteer had left on the ‘spare table’ to share.

This past year has been hard and the allotment has proven itself time and time again as a buoyancy aid for mental well-being. The routine of the watering march, celebrating as the seedlings grow and being creative with protection so they are not munched by the local muntjac deer have all offered an alternative focus during the pandemic. Now the growing fruit and vegetables are also accompanied by highlights of floral colour and the insects that pollinate them, throwing a spotlight on the local biodiversity.

I feel lucky that we managed to get our plot just-in-time. My only regret is that we didn’t register for one decades earlier.

To find out more about allotments, as well as how to apply to your local council and join the waiting list where you live, visit the National Allotment Society. To follow our allotment adventure, find us at codename_shed_c8d on Instagram, where you can also discover many more allotmenteers – from the very experienced to those who, like us, are just starting out.

Karen Cannard and The Team