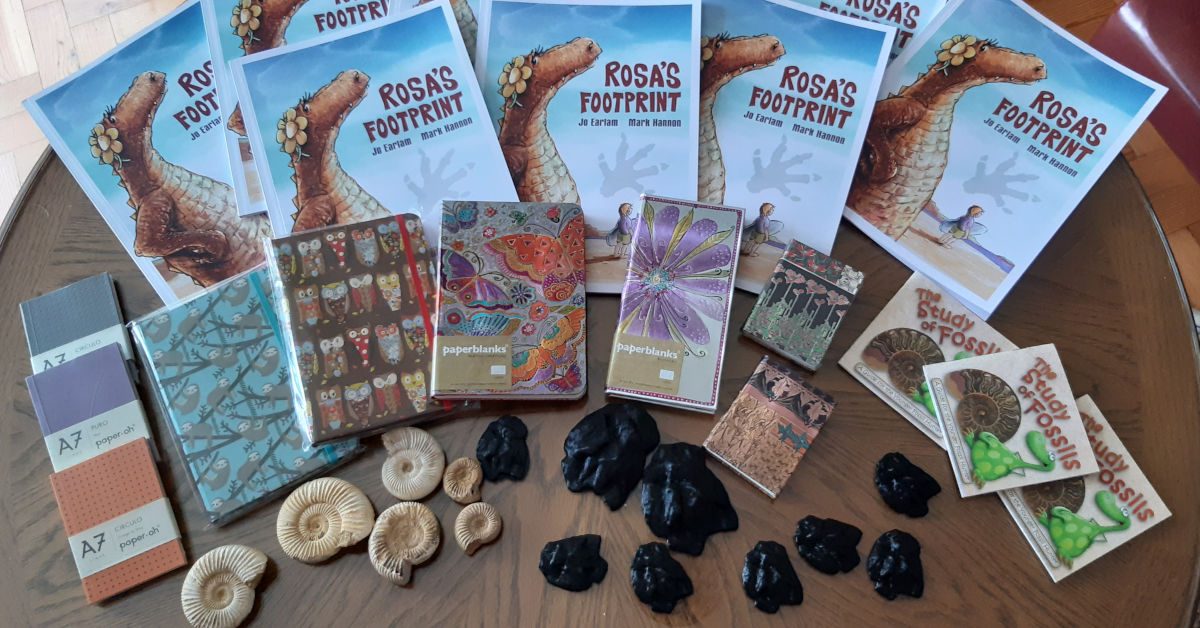 You may remember a piece we featured earlier this year about our friend, the talented children’s author Jo Earlam, her book Rosa’s Footprint and the writing contest she launched. Simon and I were delighted to be asked to help judge it and I can tell you, the bar was high.

In what seems like the blink of an eye, the prize giving ceremony arrived and what a joy it was to join Jo on the stage during the Sidmouth Science Festival to assist with it.

We were so lucky to meet many of the talented young writers who took part in the contest too. Here’s an excellent summary of the event from Jo:

It was a great week at the festival. I was there with the Think Footprint project as part of the ‘Tree Folk’ activities that were put together by Sidmouth Arboretum and in conjunction with Sidmouth Science Festival. We had a stand in Blackmore Gardens during the family activities in the morning; it included a tree-finding trail around the gardens, storytelling from me, Janet Dowling, and Ed Dolphin, and craft activities including the children making copies of their own footprint, writing a positive message and painting fallen leaves.

On the final day, Friday, the Festival organisers kindly allowed us to present the prizes for the schools writing competition on the stage, and to read out the two joint prize-winning entries. The prizes were presented by Tracey and Simon West of The Word Forest Organisation, who did the story judging. Prizes included a copy of my story Rosa’s Footprint and a replica of the real trace fossil footprint that inspired the story – this was printed by Marcus Brown of Devon FabLab at Exeter Library.

Imogen attended and read her story ‘Footprints in the Mist’ and I read Jacob’s story ‘Baekeland to the Future’. These stories from Imogen and Jacob, which I thought were both excellent, showed creativity, imagination and got to the heart of the topic. This is what judge Tracey West said about them:

“Jacob, I thoroughly enjoyed this story from the starting words to the final line. You employed imaginative ideas and wove them together with good grammar, great handwriting and I loved your inclusion in brackets – it was such fun and I could almost hear it being whispered! You did a really good play on words in the title, which was clearly well researched. Your plotline was solid and you masterfully held back the punchline – which you’d set the scene for earlier in the piece – until the very end. That’s the mark of someone who is destined to hone their talent for a wordy vocation that gives them immense joy. Keep writing and having fun with those words!”

“Imogen, gosh, another brilliantly written piece, so full of descriptive imagery I could easily see it in my mind’s eye. It was well researched, beautifully laid out in beginning, middle and end and it had a poignant and positive conclusion too – that uplift at the end is always a thrill to get in a story. I hope you continue to study the English language and explore literature too. The best way to inspire natural talent to come out is by feeding it interesting material. You are set to use your skill to make our world a better place, of that I’m sure.”

I think creative writing has the ability to do far more than entertain or occupy us. It’s also a powerful way to help us keep our mental health and well-being in check too.

If you’re feeling strung out with the cascade of news about our existential crisis, grab a pen and try writing out your thoughts and feelings in a poem, story or even a simple letter. It’s the very act of putting pen to paper (including digitally) that enables the healing magic to begin.