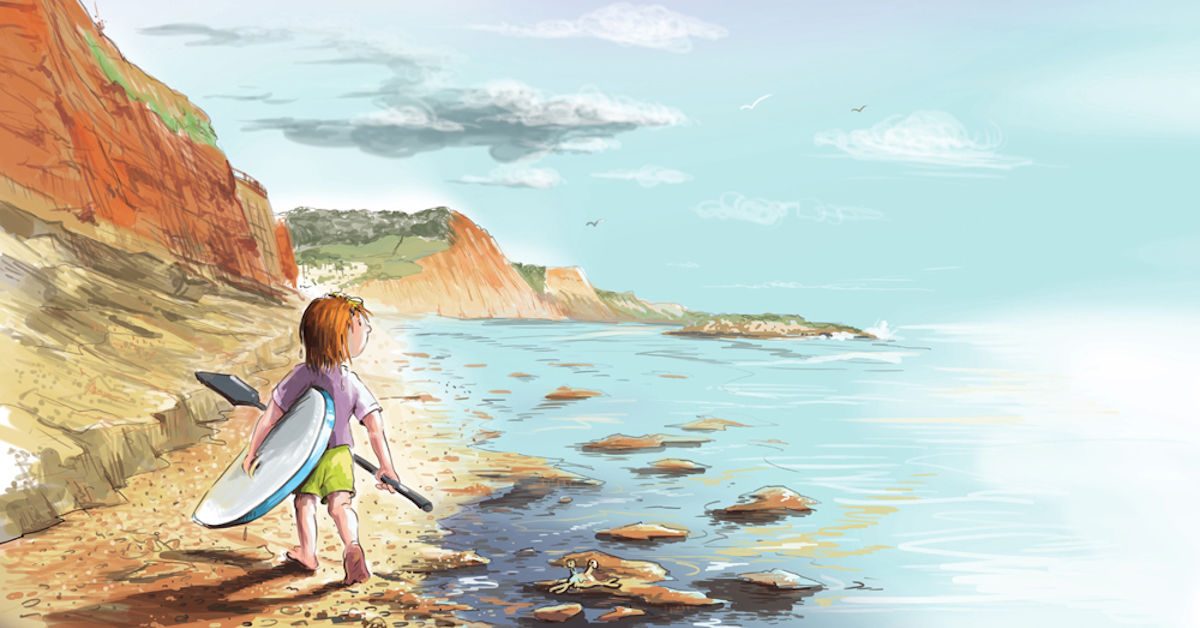 Here’s a question for you. What do a paleontologist, a children’s author, a writing competition for primary school pupils and a small environmental charity have in common?

Are you intrigued? Let me explain.

Seven years ago, Dr Rob Coram, a paleontologist from Bristol University, found a fossil footprint set in red sandstone on the beach below Peak Hill, Sidmouth. Not surprising, you might think, as the Jurassic Coast is known for its fossils, stretching from Exmouth to Swanage and representing a 185-million-year geological timeline along the way. This footprint however was the first of its kind to be found in the area. Dr Coram identified it as belonging to a rauisuchian, a prehistoric ancestor of crocodiles. These creatures grew up to five metres in length and became extinct before the time of the dinosaurs.

The footprint was donated to Sidmouth museum, which is where children’s author Jo Earlam came upon it. She realised that she had to write a story about it; that it was a perfect way to engage with children about the carbon footprint created by humanity, as well as  other environmental issues such as climate change, the importance of biodiversity and the loss of species and habitat.

‘Rosa’s Footprint’ is the result, telling of a young female rauisuchian and her father Reggie, living in a world where other creatures have destroyed and wasted resources around them, leaving half-chewed bones and trees stripped bare.  Rosa sees a small tree struggling to grow and decides to protect it by leaving a deliberate footprint, encouraging others to walk with care.

The story, with illustrations by Mark Hannon, spans the shifting sands of time to sweep back to the present day and cleverly draw parallels between the two worlds as a small boy called Colin finds the footprint on the beach buried under the remains of a barbecue and rubbish left by people.

Jo said: “The concept is based on a conversation I had with my Dad when I was about nine-years-old, the same age as Colin would be in the story. He’d taken me on a camping and walking weekend on Dartmoor, and we came across rubbish that had been left on a tor, a long way from a road. I couldn’t understand why anyone would spoil such a beautiful place. Dad told me I didn’t have to be like that and could be someone who showed concern for the natural world. It’s something I’ve always remembered.

Footprints deeply resonate with me also because of Dad. When I was tired, he would say to put my foot where his had been to keep up with him. I became consciously aware of the marks we were leaving as we walked. I used the same thought process for Rosa in the story.”

The book, published in October 2020, is part of a community engagement project called Think Footprint and was launched during Sidmouth Science Festival. As part of the wider project, pupils from local primary schools have been creating their own artwork and stories in response to the footprint. The artwork has been on display during the Festival and the children have begun writing their stories, which will be judged at the beginning of the spring term, with prizes being presented during British Science Week in March 2021. Among them is a replica of the footprint, created at Exeter FabLab, a community resource run by Devon Library Service. Marcus Brown, digital making tutor, has used 21st century technology to 3D scan the ancient footprint and print it using cornstarch.

The stories will be judged by The Word Forest Organisation’s founders Tracey and Simon West and it couldn’t be a better fit, not just because the book and the project chime so well with the aims and ethics of the charity, but also because The Word Forest Organisation itself grew (excuse the pun!) from a writing competition, the Magic Oxygen Literary Prize. The charity even gets a mention right at the end of the book.

For more information check out http://thinkfootprint.org/the-project/ where you can watch the short film about Rosa’s Footprint.

The book is available from Amazon