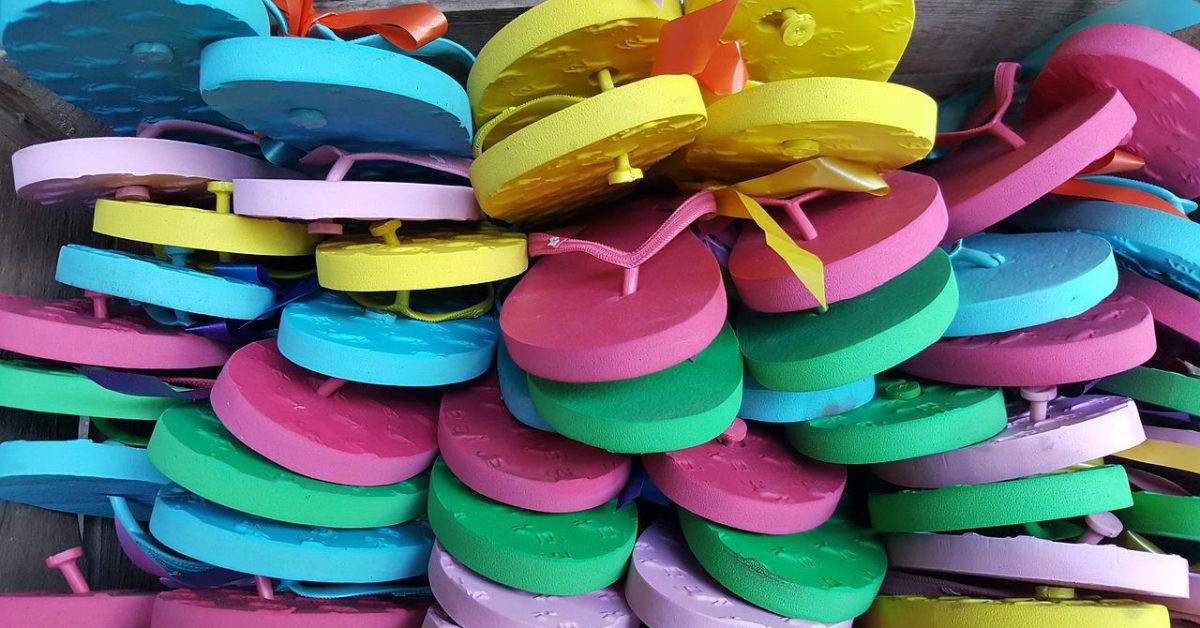 What do you think of when you hear the word flip flop? A practical solution to hot feet? Something you wear in the summer? Perhaps the best option if you live in a hot climate and don’t have a big budget for shoes.

Probably not sculptures and almost certainly not a boat!

Widely available and relatively cheap, flip flops are the most popular type of footwear in Africa, India and China, if not on the entire planet. They are light and easy to wear – however they are not the most long-lasting items and are usually discarded after a few years. Since they are usually made from plastic or synthetic rubber, they do not biodegrade, and so join the vast amount of plastic waste that is generated across the globe. It may surprise you to know that thousands of flip flops end up in the oceans each year, eventually being washed onto land with the tides. It is on the beaches of Kenya that these two stories begin.

Julie Church, a marine conservationist was working in northern Kenya in 1997 and found that the local people, including the children, were using discarded flip flops as a resource and turning them into various items, including toys. She decided, as part of her work, to promote these items, both to help clean up the ocean and to provide an income for the people in the community. This was the birth of Ocean Sole, which has developed into a successful social enterprise that now provides a steady income to nearly 100 Kenyans on a low income. People are paid to collect discarded flip flops, wash and process them and turn them into brightly coloured sculptures and other products, which are now for sale internationally. This short video shows you how it’s done.

A dhow is a sailing vessel with one or more masts and, typically, a long thin hull. Built in Lamu, on the coast of Kenya, by Ali Skanda and his team of boatbuilders, the Flipflopi Dhow was made using traditional methods but with plastic waste mainly recovered from the local beaches instead of wood. It is covered in sheets made from thirty thousand recycled flip flops. A collaborative project, the idea was to raise awareness of the issue of plastic pollution and in January 2019 the dhow made a voyage along the Kenyan coast, all the way to Zanzibar in Tanzania, stopping at a number of places including Kilifi and Mombasa. Workshops were held to inform the local communities of the dangers of plastic waste and what they can do to help. Later that year, the dhow travelled to Nairobi (on the back of a lorry!), to participate in the fourth United Nations Environment Assembly.

Following the success of the first Flipflopi Dhow, this year the team began construction of a larger boat, again made entirely from plastic waste. The new craft will be twenty three metres long and sixty tonnes, capable of travelling across seas and carrying its important message right around the world.

Here’s a short film, one of a planned series, that tells you more about the process of building this extraordinary boat.