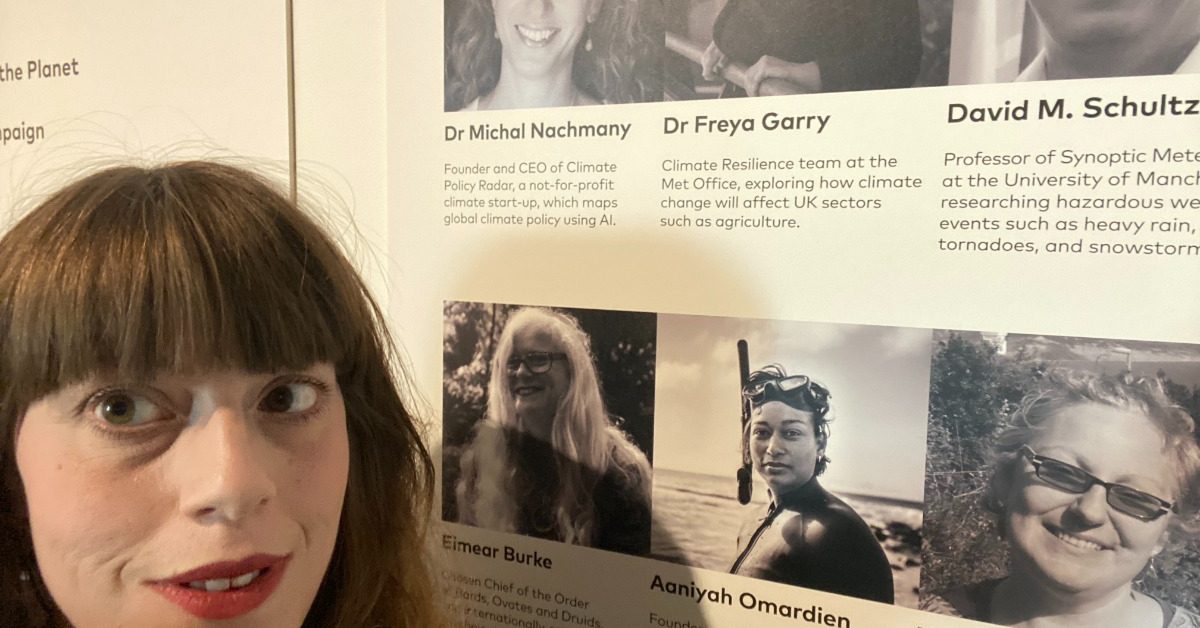 There’s something amazing going on in the gallery at East Quay, Watchet. It’s called Better Than This and it’s the first exhibition on their theme of ‘climate and change’. It features new works by three talented artists, each of whom has worked closely with scientists and activists to explore the possibilities for hope, love and positive change that are unfolding as we progress into an uncertain and sometimes frightening future.

Liv Torc is a renowned poet and spoken word artist. Her piece, Meta Than This, was created after interviews and conversations with many people including our CEO, Tracey West but also agriculturalists, environmentalists, engineers and climate scientists: she calls them Earth Guardians. Liv asked them how they feel about the climate emergency and her piece is the embodiment of those discussions.

You may remember Liv’s name from the Hot Poets creative writing project which she co-founded with Chris Redmond. It resulted in a wonderful collaboration between Word Forest and esteemed performance poet, Zena Edwards (see her piece Mother of the Forest here).

Kathy Hinde is another contributor to the Better Than This exhibition at East Quay. She is widely known for her audio-visual installations, performances and sculpture. Kathy’s incredible contribution explores the symbiotic nature of lichens and how they are useful bio-indicators, along with phytoremediation and the circular systems of nature. Her collaboration with digital artist Matthew Olden allows the film loops making up the piece to respond to live air quality data. Believe me, it may sound confusing but it’s an incredible piece that makes so much sense when you experience it.

Amy Howden-Chapman’s work completes the set with a powerful visual and audible punch. Amy concentrates on the climate crisis and environmental justice. Her piece, aptly titled The Apologies 2022, was developed with writer Andrew Michael Gorin; twenty apologies are etched onto brass sheets, accompanied by an audio recording of the letters which are spoken by actors with humility and regret laced throughout. These look at, amongst other things, blame, responsibility, complicity and accountability relating to the human and environmental costs of climate change. It’s virtually impossible to experience this exhibit without sadness and absolute belief that you really are listening to a future real life event.

We are thrilled to have permission to share Liv’s extraordinary, humourous and thought provoking poem, along with the information displayed with it in the gallery.

If you have the opportunity, do go and see this wonderful exhibition for yourself. It’s on until the 31st August 2022.

Meta Than This By Liv Torc

By their own admission, the scientists are not great at it… human beings have so much potential but are so very easily distracted, sometimes by the truth itself. Besides, it’s been a tough couple of years, what with COVID, war in Europe, all the talk of Doom’s Day Clocks… the constant, varied, neverending stream of information – much of it controlled by the people who want to keep us distracted.

There is only so much fear, anxiety, tragedy and Twitter pile-ons the average person can absorb before it gets a bit overwhelming and Netflix or scrolling through kitten memes, seems preferable.

That doesn’t mean it isn’t serious. It is serious. Unless we throw every single innovating and adaptation at climate change, we aren’t going to be able to save this one. And by this one, I mean us. And by throw everything, I mean EVERYTHING, including a much better PR Team and maybe even some poetry.

This commission was written by Liv in response to interviews and conversations with some very BIG BRAINS… amazing scientists and environmental activists working on the frontlines of climate change. Through the interviews, Liv asked ‘The Guardians’ (they hate being called that by the way) to share their thoughts and feelings on humanity, the planet, their work and the tricky job of communicating climate change science.

In response to their answers Liv wrote ‘Meta Than This’, which is a creative attempt to get across lots information without making people feel bad or bored. It’s also a satire but at the same time, it’s true. Oh, and it’s a love story.*

Please note all words and poetic interpretations are the responsibility of the Artist and not the Scientist. Thank them, blame her.

Liv Torc and the Team