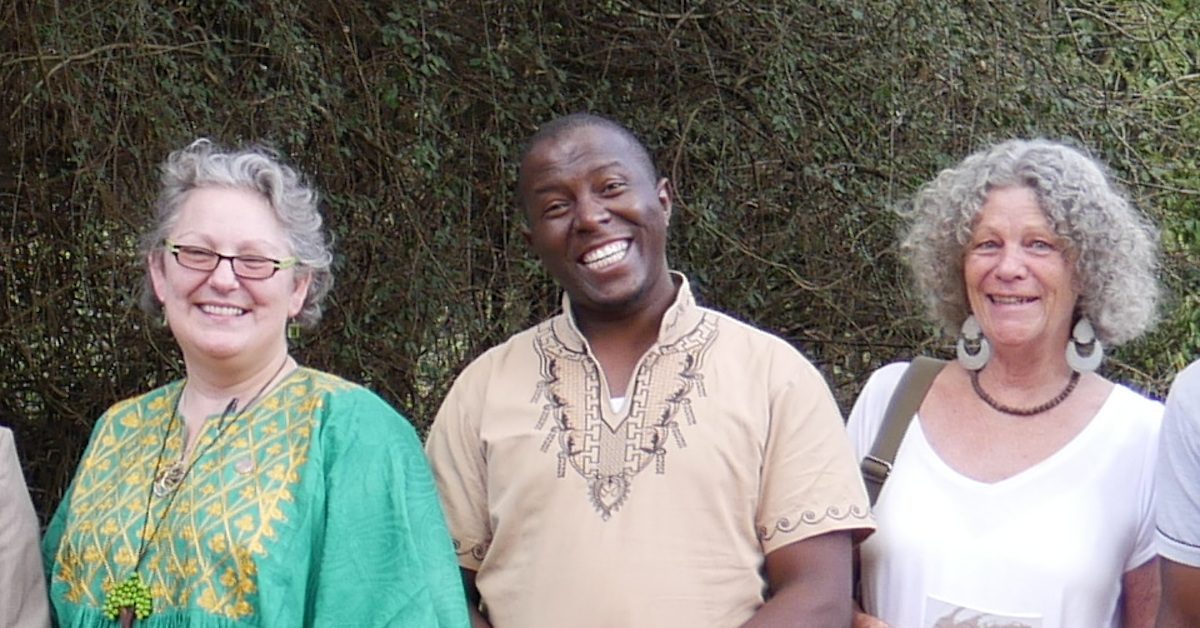 Thirty minutes before I went to bed last night, I learned about the brutal murder of an earth sister and good friend in Kenya: sleep did not come easy.

Joannah Stutchbury was a third-generation Kenyan and she lived in Kiambu, some 18 km from Nairobi City Centre. She was a tree lover, a permaculture practitioner, a full-on environmentalist and conservationist, a mum, an earth mother, she had an ardent and unwavering passion for the planet, she was an earth protector, wonderfully bonkers, full of life and joie de vivre. Her vibrant light has been stolen, ripped away from a world that so desperately needed her and there’s a Joannah shaped hole in the Universe.

It looks like this amazing, regular, everyday, ordinary and extraordinary woman was targeted to be murdered.

I’ve only been able to glean news from the news which is increasing as the day drifts by, but I understand Joannah was shot four times – once in the head – on her drive at her home by unknown assailants at around 10pm on Thursday night. Neighbours found her dead with her car engine still running. I’m praying she didn’t see it coming and that she didn’t suffer.

From what I’ve learned, the murderers didn’t go on to ransack her home so robbery clearly wasn’t the motive. It’s more likely Joannah has joined the horrific club of vocal planet protectors, killed purely to deaden their voices and terminate steadfast efforts to make our world healthy. She was 100% guilty of making lots of noise to preserve the Kiambu Forests and wetlands and I’m still coming to terms with that fact that her determination to protect the key components we as a species need to live, might have been the very thing that signed her death warrant.

I understood from early news articles that friends and neighbours had placed logs and branches near her home in Mushroom Gardens. I believed initially it was surely just the beginning of a local outpouring of sadness, respect for her and what she believed in, love, confusion and more, all driven from a desperate need to do something, wrapped around utter disbelief that she had been brutally murdered. I’ve since read that it was the perpetrators who placed the debris on her drive, forcing her to get out of her car, whereupon she was attacked.

Kenyan President, Uhuru Kenyatta, made a statement earlier condemning her murder. He’s quoted in the press as saying: “For the longest time, Joannah has been a steadfast champion for the conservation of our environment and is remembered for her relentless efforts to protect Kiambu forest from encroachment.” I’m looking forward to hearing what he says next in this regard.

Simon and I met Joannah in person a few years back when we hosted our first international reforestation conference: Clear the Air Reforest Kenya 2018 at the Green Belt Movement’s Learning Center in Langata, Nairobi, not far from where she lived. Joannah knew some of the other attendees and her first-hand experience gathered over many years protecting trees and conserving wildlife, meant she was a whirling dervish, jam-packed full of advice for the other delegates. She distributed her thoughts, great ideas and terrifying experiences like a Catherine wheel.

Our conversations were frequently tree and nature based. She was never one to shy away from an ambitious project either. One day she sent a note saying: “I am trying to find an organisation who can help Kenya move HUGE, old growth trees, before they are cut to the ground for a new road system. Can you recommend anyone? We can try and crowdfund for the project. Urgent! Thanks. Jo”.

Our mutual friend, environmental journalist Cyprian Ogoti (pictured below) recalled earlier today: “I remember her for her tireless efforts in protecting Kiambu Forest. I remember the Under a Tree Conversations where she used to host us, narrating how beautiful the forest was and how dire was its need for protection from the land grabbers. I have lost a close buddy who took Mother Nature and conservation into her heart. We will carry her legacy on protecting Kiambu forest.”

In 2019, Joannah plotted a course to do a: “6 month immersion to become a Forest Therapy Guide! Shinrin-yoku, Forest Bathing started in Japan in 1982!” she exclaimed with intoxicating excitement! Joannah was thrilled by what the forest could offer humans in terms of rest, rejuvenation and general well being, as well as acknowledging their critical role in balancing the planet’s weather and hopefully helping restore the normal rains to Kenya. She felt this would help her understand more about the science and hopefully, enable her to spread the word, far and wide. If successful, perhaps it would bring a new swathe of people on board who shared her passion for safeguarding Mother Nature, as if our lives depended upon her, which of course, they do.

You know, the trouble with people like Jo is she actually placed immense importance and considerable value on the health and well being of the big squishy blue ball we all live on – unfortunately, nowhere near enough global leaders share that vision. If they did, she wouldn’t have been yet another lone voice, screeching at land grabbers and corrupt bombasters, being a voice for the voiceless, throwing herself with indescribable bravery into the huge metal buckets of diggers as they clawed their way through the trees, razing them to the ground.

For a woman who loved peace, permaculture, the organic way, life, trees and creatures, she did a remarkable job of locating and channelling inner anger and turning it into fuel so she could stand up for the forest and all who depend upon it. She also completely recognised the lot of marginalised, downtrodden, rural women of Kenya. In 2019, during our Monitoring and Evaluation visit, she kindly played host to a group of our team who had to stay overnight in Nairobi as they headed towards Coast Province and she made sure they left with a bag of old but perfectly good underwear that we could distribute to the Mothers of the Forest, the women’s empowerment group we support in Coast Province.

How many more environmentalists are going to have their life force ripped away before governments stop paying lip service to protecting our planet and actually stand shoulder to shoulder with these brave pioneers. They need to cement-in the required legislation to eliminate greedy corporates, corrupt authorities, thoughtless land grabbers and those whose very existence is propelled by indiscriminate blood money and dirty backhanders.

I’ve stated above that Joannah was an exceptional soul, a noisy, wonderful, troublesome woman on a mission to protect the world in countless ways but she was also a normal, everyday person, just like you and me. She was a woman with no agenda other than living sustainably, sharing her knowledge, taking care of forests locally, worrying about the existential climate crisis globally and she loved Mother Nature to the max.

As you ponder this tribute to commemorate the extraordinary life of Joannah Stutchbury, please send a prayer up to the Universe requesting the senseless murder and untimely death of this wonderful environmentalist be the one that finally breaks the camel’s back and thrusts governments around the world into action that matters. They need to shift their priorities away from lining their pockets and keeping on the good side of the bad guys, and they need to start putting planet and people before profit and political power.

The time for empty promises, tardiness, bullshit timelines and weasel words has long gone. How many are dead in western Europe right now because of the most recent flash floods? I believe it numbers 120 with hundreds more unaccounted for – the storm is still raging.

Without healthy, abundant forests across the planet – particularly in the tropics – without widespread, immediate action from those who occupy the important seats and more besides, Greta is absolutely right: “We are fucked.”

Lala salama rafiki, my tree buddy, Jo. Sleep well darling girl and thank you for all you ever did to protect our world. You will never, ever be forgotten.