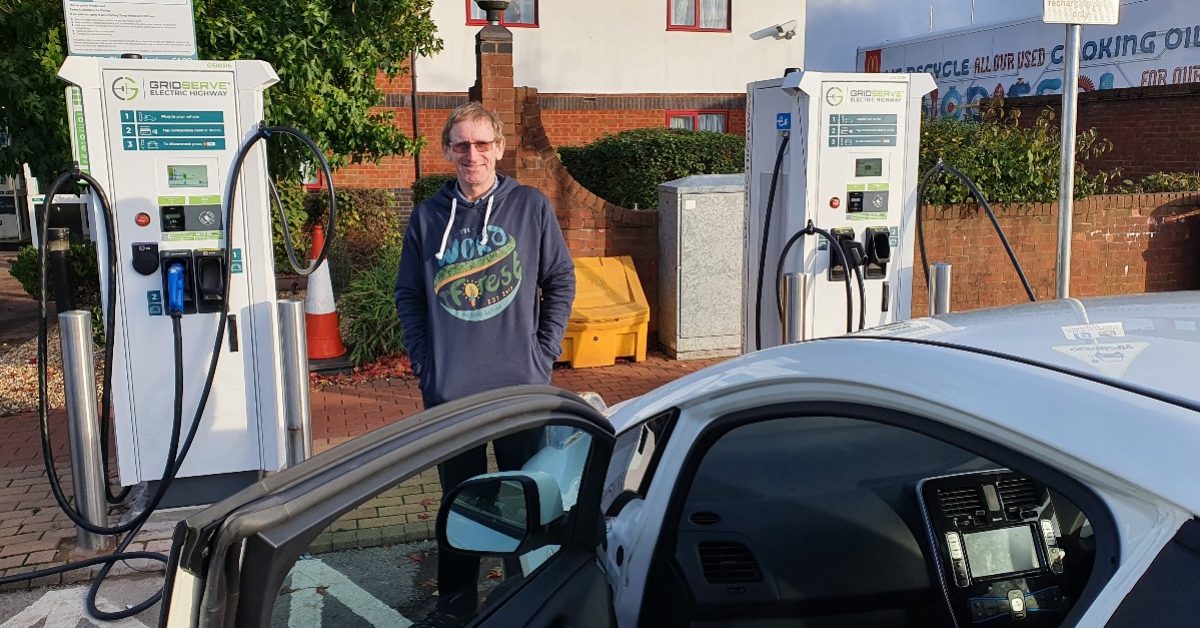 On the Road to COP26

It’s six weeks to Christmas, it’s sunny and I’m wearing sandals. The stormy weather that hammered the South West last night and flooded our Education Trustee Helen’s Somerset kitchen (again) has thankfully shifted north. Simon and I are on the road in our second-hand Nissan Leaf, bound for Glasgow and COP26.

The car is filled to the gunwales with pull up banners, video equipment, computers, a stack of our last Report and Accounts, a couple of collection tins for the events we’re putting on, a suitcase packed with our favourite charity shop clothes, some plant-based food staples and our vegan slippers.

The mood in the car is optimistic, despite the 450 mile trip ahead of us which we’re dividing over two days. The mission this afternoon: get somewhere north of Birmingham, get a good night’s kip and head off early tomorrow, with the added bonus of a free hour under our belt. We’ve both just recovered from a kicking from COVID-19 and to be honest, a few days ago I wasn’t sure we were going to make it at all.

Thankfully, my health turned the corner and as soon as I stopped being an Olympic grade sleeper, I ploughed every ounce of my energy into recovering fully and packing for COP.

Right now, we’re at Strensham Services, charging up the car. It’s the second charge on this journey so far – we don’t have the most modern Leaf and that’s fine. The battery gives us about 120 miles on a charge and that means we have to take each leg of the journey easy. Mind you, we squeeze more out of it than was possible in the first Leaf we had. By the end of its life, we were lucky to get 60 miles without panicking we’d never be able to get home.

We have been proud pioneers of the EV movement and were early adopters of the technology way before the charging infrastructure had any comforting welly to it, especially around Dorset and Devon, which 7 1/2 years in, still leaves a lot to be desired.

Our first charge was at Gordano Services in Bristol and we had to queue. This second charge incurred a wait too, because of a fella heading to Yorkshire boosting his MG to 100%. Funnily enough, while we were busy sucking electrons from the grid another man patiently joined the queue who was heading home having visited Lyme Regis, our point of origin. These days, queueing to charge is minorly irksome but it’s fantastic in equal measure! EVs are everywhere, the demand is increasing and thankfully the efficiency, range and price points are getting better all the time.

Simon and I are not alone on this journey to Glasgow. From a handful of other starting points around the country, several amazing colleagues are heading to Scotland too via bus and train. I cannot wait to be in the same creative space with them – we have such incredible plans over the fortnight ahead.

Lots of messaging at London Euston, posters and a video that was very powerful showing lots of eyes and reading “COP26, everyone’s watching you”…let’s hope Boris see’s all this and travels by train!

During pondersome moments on this journey I wondered how many world leader COPEEs will have travelled to Scotland in an EV or a train?

I suspect Boris Johnson and the No: 10 crew will fly, although I’m speaking without knowledge at this point – I will be thriled to stand corrected and will let you know if he does anything other than fly.

Joe Biden flew to Europe and met with the Pope ahead of COP. Fair enough, some would argue there’s a big pond in the way and he is a major player, he has to be there however, I wonder whether he had to fly in the Beast, a custom built bullet-proof Cadillac and a massive handful of entourage vehicles to keep the Beast company. Don’t they have bullet-proof cars anywhere else in the world? Surely he could have hired something, or had a little fleet built of outdoor toilet grade EVs built here ahead of the conference.

You’ll be heartwarmed to hear that several delegates from the Netherlands, Belgium, Italy and Germany, including a bunch of European Parliamanet delegates, are travelling on a cross-country Climate Train. It was an idea that brewed from a partnership with Youth for Sustainable Travel, Eurostar, NS, ProRail and Avanti West Coast. They say the carbon footprint from one flight between Amsterdam and London is the same as seven Eurostar journeys.

Great news, I say. All we need is for the cost of train travel to reflect how gentle it is on the planet and we’ll be on the right road!

Tracey and The Team