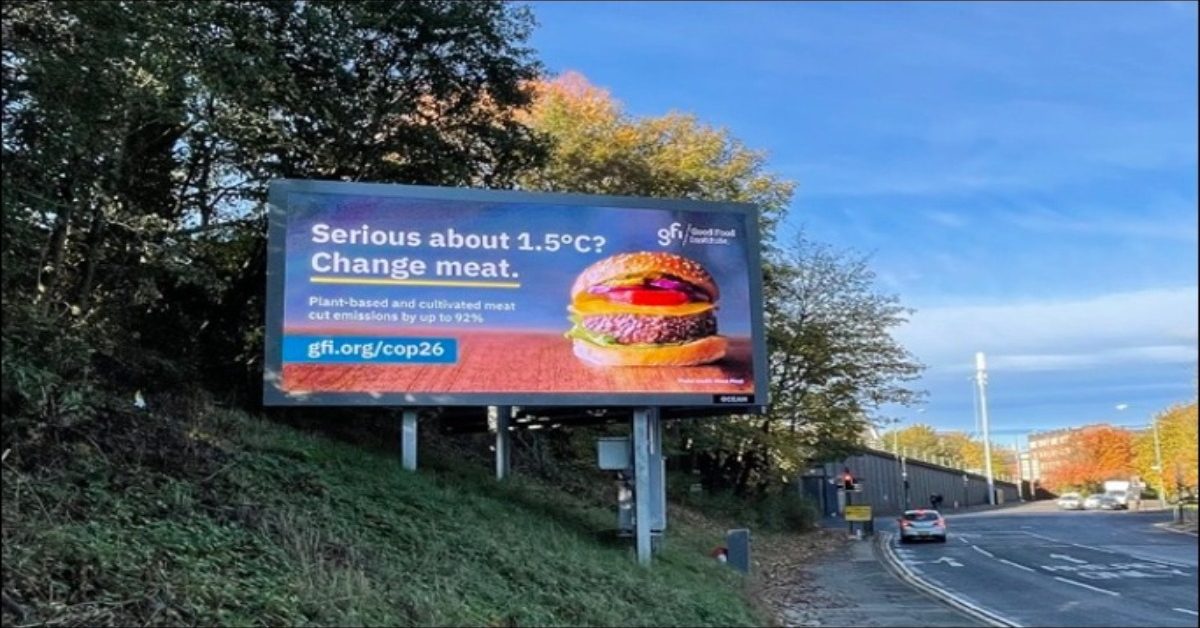 COP OUT at COP 26? A Missed Opportunity That’s Hard To Digest

COP 26 has been described as our ‘Last and best hope to tackle the Climate Emergency’. This event has been hyped-up for months. Leaders from all over the globe have gathered in Glasgow to discuss and deliver critical climate goals and actions if we are to stay below 1.5°C of warming. Such commitments are essential to minimise the extremity of the climate crisis and 1.5°C degrees was the target committed to by all nations under the Paris Agreement in 2015.

So, picture the scene. I’m in the Green Zone, soaking up the atmosphere, taking it all in. After getting into Glasgow the night before at 11 pm and after an early rise for the first day of COP, I head to a café for some well-needed nosh. But what do I see? Two plant-based options amongst a sea of meat and dairy, including beef, salmon and cheddar. According to a recent report by the Big Issue, the COP 26 menu is almost 60% meat or dairy based.[1]

I must admit, I was pretty shocked.

Why is this an issue and what role does animal agriculture play in the climate crisis? Well first, let’s talk about the carbon footprint of animal agriculture. According to the Global Livestock Environmental Assessment Model, the animal agriculture industry is responsible for 16.7% of global greenhouse gas emissions.[3] Reports also show that by 2030, the livestock sector is projected to account for nearly half of the world’s emissions budget for 1.5°C.[4]

The fact that so many non plant-based options were even on the menu was a definite stand-out. Meat production has been scientifically shown to be particularly harmful for the health and wellbeing of our planet. Additionally, it is responsible for significant biodiversity loss, large dead zones in our oceans and significant amounts of deforestation, especially in the Amazon. Just taking beef as an example, it requires 160 times more land to produce and creates 11 times more greenhouse gases than staple plant-based foods such as potatoes, wheat and rice.[5]

People are calling out the fossil fuel companies and encouraging them to take full responsibility for the dangerous impact they are having on our planet. Yet, according to Meat Atlas – facts and figures about the animals we eat, a new report by Friends of the Earth and the European foundation Heinrich Böll Stiftung, ‘The world’s five biggest meat and milk producers emit the same volume of climate-damaging greenhouse gases as Exxon, the oil giant.’[6]

Exxon Mobil Corporation is one of the largest oil and gas companies in the world. According to Statista, they rank first on market capitalisation.[7]

It is not just about emissions, however; land and water use are also important considerations. The average water footprint per calorie for beef is 20 times that of grain.[8] Our World in Data states that: ‘Livestock takes up nearly 80% of global agricultural land yet produces less than 20% of the world’s supply of calories.’[9] The report contains a shocking graphic that shows the mismatch between the amount of land used and the amount of protein produced upon it.

Embracing a plant-based diet is, as a fact, the number one way that individuals can reduce their carbon footprint. Studies have shown that dietary greenhouse gas emissions associated with  meat-eaters are approximately twice as high as those for vegans.[10] Additionally, a study conducted by Oxford University in 2020 found that transitioning to a plant-based diet is essential if humanity is to avoid the worst impacts of the climate emergency.[11]

According to the Good Food Institute Europe, eating a plant-based can cut global greenhouse emissions by up to 92%.[12]

The devastating environmental implications of animal agriculture are huge. Yet, this is not just a climate and ecological issue. Veganism is a totally intersectional choice that covers humanitarian issues too. In case you are not familiar with the meaning of intersectionality, the Oxford English Dictionary defines the term as ‘the interconnected nature of social categorisations such as race, class, and gender, regarded as creating overlapping and interdependent systems of discrimination or disadvantage’.[13]

There is a clear link between animal exploitation and feminism, racial equality, migrant crises and poverty. Friends of The Earth’s Meat Atlas states that ‘Almost two-thirds of the world’s 600 million poor livestock keepers are women.’[14]

We know from our work with the tree planting communities in rural Kenya that these women typically face disadvantages every single day because they have restricted access to farm ownership, services and land.

In the Global South, thousands of people are also being killed for defending their rights on their own land. This is a topic that Eating Our Way to Extinction, the stark documentary that explores the environmental and human impact of animal agriculture, explores in vivid detail. I was lucky enough to attend a screening of this profound documentary at COP 26. The film revealed how the villages of the Amazon’s indigenous people’ are being burned to the ground, their tribes slaughtered and their land stolen to make space for big corporation animal agriculture.[15]

Many people expressed disappointment in what COP 26 would achieve before it even began. Some of the reasons for the discontent include the lack of global representation to express indigenous climate voices and seeing corporate partners that favour greenwashing as Summit sponsors. There are undoubtedly many reasons why hundreds of thousands – if not millions – of people around the globe have protested and marched for climate and social justice during the COP fortnight. People want action, not words, from organisations, businesses, governments and global leaders. They want them to treat this issue with the gravity it deserves.

The simple fact that the world’s largest climate summit wasn’t plant-based is another classic example of inaction, despite the organisers being well-informed and well-aware of the issues that we face at hand. Even the Oscars, the Annual Academy Awards Film ceremony in Hollywood, adopted a 100% plant-based menu last year in recognition of the link between animal agriculture and the climate emergency.

At COP 26, where #TogetherForOurPlanet and #OneStepGreener are supposed to be the prevailing messages, the food choices support systems that exploit animals, human life and our planet. Some might say the hypocrisy prevalent here is rather profound.

Yet it is empowering to know that we have some control over how our future plays out. We are all facing an existential crisis – every actor needs to play their part to solve it.