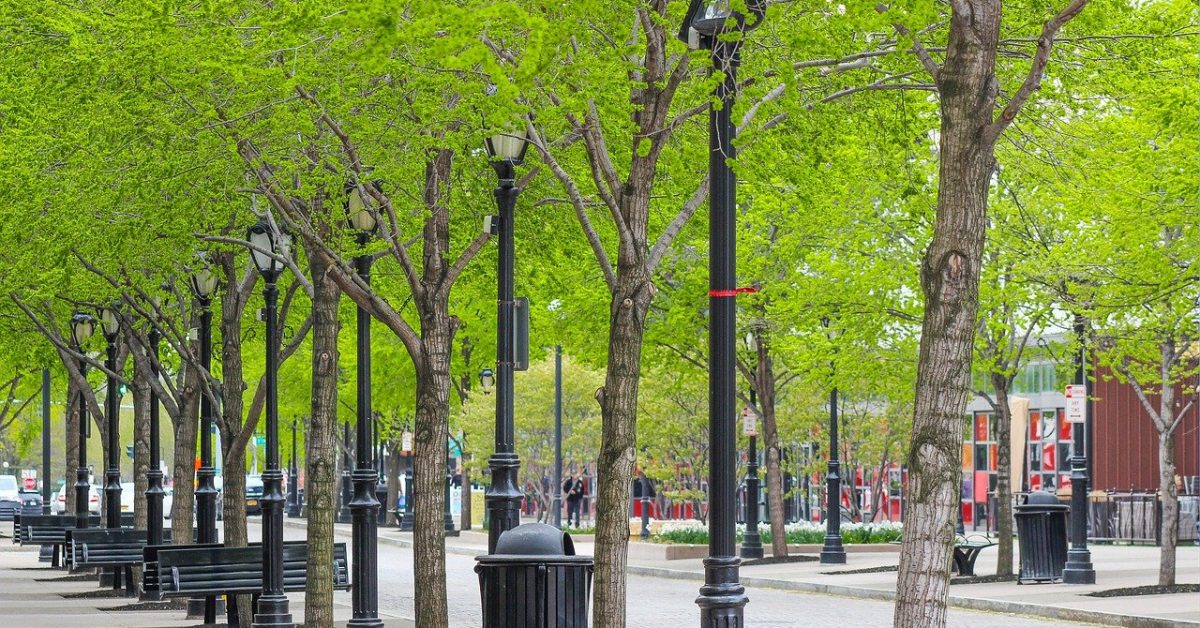 The Importance Of Urban Trees

Trees in urban spaces are the forgotten heroes when discussing climate change and, often, the awe-inspiring rainforests of the tropics and sub-tropics take the limelight. Of course, this is to be expected. These areas, along with other valuable ecosystems, allow life on earth to survive and flourish (the Amazon rainforest is frequently referred to as the ‘green lungs’ of the planet) and are home to seemingly limitless amounts of biodiversity.

However, with most of humanity now living in cities, the importance of trees in urban areas should not be underestimated. Trees and green spaces in towns and cities are essential to local economies, urban planning, mental and physical health, leisure, heat mitigation and much more. For this article exploring urban trees, the benefits are placed into 3 categories: Environmental, Social and Health and Economic.

Cities are tightly compact areas filled with infrastructure that absorb and keep heat, such as pavements and buildings, which ultimately increases the temperature of the surrounding environment. This is known as the Urban Heat Island Effect and is a pressing public health issue. Heatwaves are deadly events that are causing devastating losses of life in urban areas; without correct measures put in place and coupled with a warming climate, they will become deadlier and more frequent. According to a report published by c40 [1], approximately 200 million people in cities are living in conditions of extreme heat.

Urban trees can help to significantly mitigate this. Trees carry out a process known as transpiration which, briefly, is the process of water in the soil being absorbed through the roots, moving up the canopy and ending up in the leaves. Heat from the sun converts the water into vapour and it eventually evaporates into the air. This process acts as a ‘cooling effect’, lowering surrounding temperatures. In addition, trees cool areas by simply providing shade and, it has been shown, correctly placed urban trees reduce energy use in homes.

Trees in urban spaces can play a significant role in cities combating climate change and mitigating its impacts. Trees sequester carbon dioxide, a prominent greenhouse gas that contributes to the warming of the globe and a changing climate. The organisation, Treesforcities, states that each year 2.4 million tonnes of air pollution, which includes carbon dioxide, is absorbed by the trees in London.

Planting and maintaining trees in urban environments is a cheap, nature-based solution that can help in the ongoing struggles with climate change.

In his book, Into the Forest, Dr Qing Li explores the many psychological and health benefits that trees provide us. Humanity grew and developed alongside trees and has an innate connection with them that evokes a sense of calm and relaxation. Li claims that trees and green spaces in urban areas are as vital as those in the countryside, providing city dwellers with respite from the hustle and bustle of urban living.

In addition, the book provides numerous studies and experiments that highlight the importance of being around trees. Below are two that are pertinent to urban areas:

As well as reducing carbon dioxide, urban trees are invaluable when tackling poor air quality, which is synonymous with cities. Transportation, such as cars and buses, emit dangerous chemicals as particulate matter that is detrimental to human health. Particulate matter has been linked to cancer, asthma, strokes, lung diseases and heart attacks; those in cities are thus more exposed to these health risks [2].

Trees can help. Particulate matter can settle on the leaves of trees and get washed away by the rain. Some trees are better than others at absorbing particulate matter – with the silver birch being found as one the most effective.

Some studies have found a link between the presence of trees and the increases in property/market value for houses. In the US, one study found that streets lined with trees could increase the value of a property by up to 6% compared to streets that had no trees. In addition, informal survey research by estate agents in Warwick (UK) found that properties on tree-dense streets were in higher demand [3].

Opting for planting trees in city spaces is a green solution to tackle environmental issues while simultaneously providing jobs and boosting local economies. Work carried out by UK100 found that increasing woodlands in the Greater Manchester area could provide 2,300 additional jobs in the city area [4].

Trees in our urban environments are essential. This piece has been brief regarding their many benefits to humanity and the general well-being to the planet. It is fundamental that we continue to invest in greening cities and to ensure that everyone has access to green spaces.