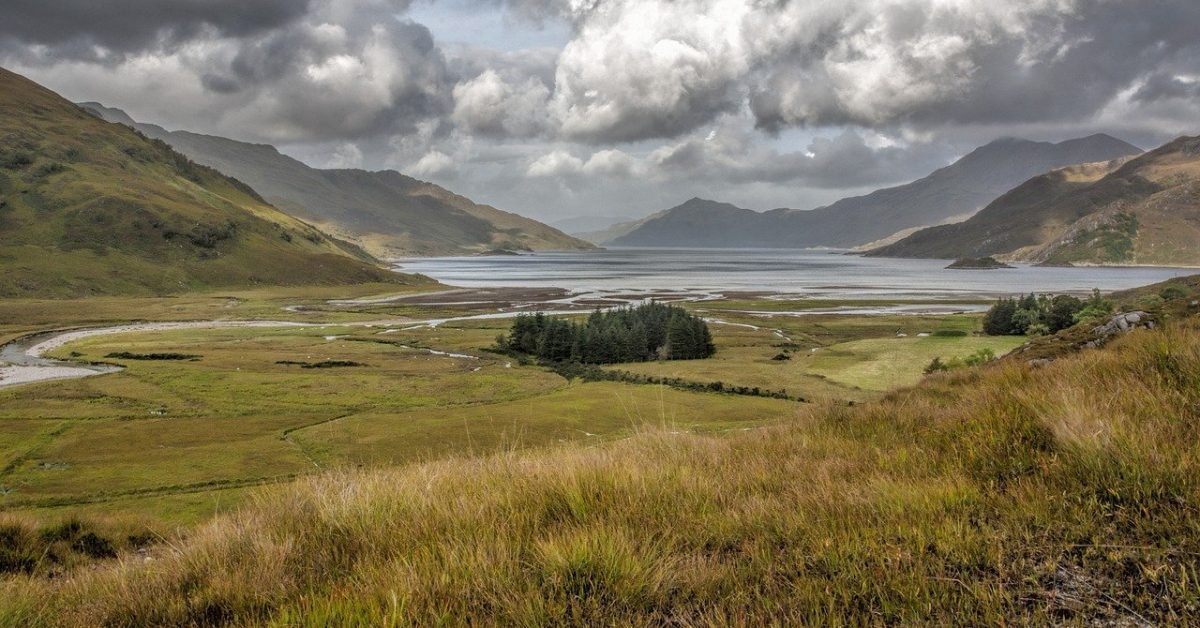 The Scottish Highlands – a mesmerising expanse of moorland, mountain and boreal forest with a deep and vibrant history. Stories of King Arthur and Merlin tell of this mystical land and its ability to come to life, aiding them in battle and protecting its inhabitants from violent outsiders. This is a truly iconic place and unlike any other.

However, five thousand years ago, it was not the mostly treeless landscape we see today. A vast and dense blanket of Scots Pine stood from Loch Lomond in the south to the Cairngorms in the east and almost touched the north coast. If still at its full extent today, the Caledonian Forest would cover 20% of modern Scotland [1]. So why does only 1% of this majestic woodland exist today in a few small, isolated fragments such as the area near Loch Lomond pictured below? There are four main factors that have contributed to both the reduction in tree cover and its inability to re-establish itself naturally.

Firstly, climatic changes over the millennia have had various impacts on tree growth and regeneration. An increase in rainfall around 3000 years ago caused the treeline to recede as peat bogs expanded. The majestic pines were replaced by scattered broadleaved trees and scrubland; however, it is thought that the majority of this was regained as the cold, wet period came to an end. The Little Ice Age in the 14th century also contributed to the decline in tree cover, but by this point, other factors were greatly at play.

The felling of trees due to an increasing human population began as the first farmers started to burn scrubland around 5,900 years ago. The forest could not recover in these areas due to the impact of grazing animals and so its decline quickened. Felling for agriculture, timber and fuel would continue to rise through the centuries. In the Middle Ages, Norse and Celtic peoples cut down vast swathes of forest to build houses and ships as they settled, and the demands of war would ever increase the need for local timber. This would culminate in the UK almost running out of timber to fell during the First World War [2].

Throughout all this, overgrazing and an increase in wild herbivore populations have prevented regeneration, as saplings are stripped bare by sheep or wild deer before they can become established. The Highland Clearances were a devastating blow for the highland people and culture and made way for the large-scale sheep farming we see today. However, despite it’s dark roots, it is an integral part of Scottish history and whether they are kept for wool, meat or even milk, their numbers have stayed consistent at around 6.73 million animals over the last ten years [3]. When you combine this with the estimated 750,000 wild deer present across the country [4], it’s no wonder that trees are struggling to re-populate.

One reason for the huge increase in cervine populations is the lack of apex predators such as wolves, lynxes and bears. These were all wiped out over the last 1500 years, with the last wolf being killed somewhere between 1680 and 1888. In other European countries where these species are present, deer populations are much lower and are controlled naturally. Another large mammalian species no longer present in significant numbers is the wild boar. Through their constant rooting for food, boar create the ideal conditions for germination and help to disperse the seeds by pressing them into the ground. With their population so reduced, this factor no longer has a significant impact on the health and growth of Scots Pine in its former range [5].

So, what is being done to help restore this beautiful ecosystem? While we cannot control the wild Scottish weather, three of the four factors listed above are being addressed by charities and official bodies.

The Forestry Commission (now Forestry and Land Scotland) was founded in 1919 to prevent the situation at the end of World War 1 ever arising again by controlling the felling of Scottish trees. They started by planting large numbers of Sitka Spruce, which support fairly limited ecosystems compared with the ancient forests [2]. However, priorities have since changed, and they are doing great work to reverse the situation. In addition, Trees For Life, a charity who have been working to protect and re-establish the Caledonian Forest for almost 30 years have been able to buy or protect areas of the forest that still exist today, ensuring that they can thrive and recover.

The issue surrounding wild deer is controversial as they are not the enemy, merely victims of their own success. A cull may seem like the easy option but is seen by many as inhumane and unnecessary. The favoured option currently is to use fencing to exclude these populations from the recovering areas. This also prevents overgrazing by domestic populations, killing two birds with one stone [1].

Over the years there have been many plans to reintroduce the three big predators to control these populations naturally. However, people in the UK have grown used to their absence and many feel uneasy about the potential for them to cause harm to humans or livestock. Boar, while herbivorous, are dangerous creatures and are responsible for serious damage to crops in mainland Europe and so it is no surprise that a full-scale reintroduction is not supported by many.

In conclusion, while the Caledonian forest will never again be as vast as it was at its peak, the work that is being done to restore it is hugely beneficial, not only to local wildlife such as the elusive red squirrel or Scottish wildcat, but also to our planet as we fight to rebuild the lungs of the earth.

If you would like to find out more, visit treesforlife.org.uk.