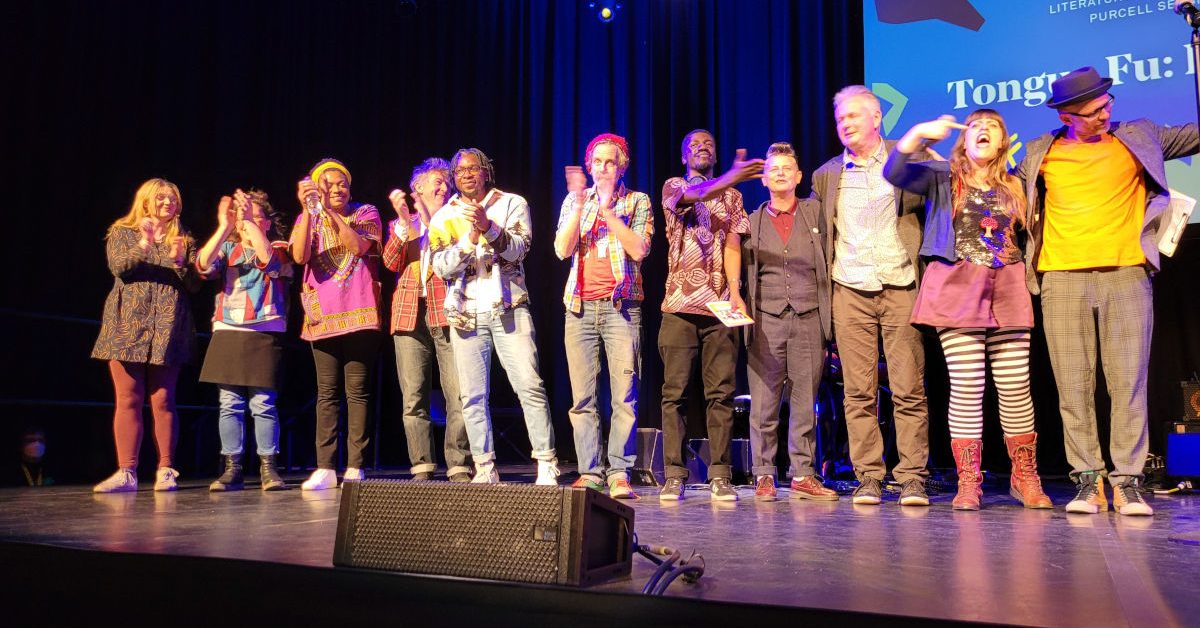 Hot Poets at The Southbank Centre

On Friday 22nd April 2022 Tracey and I had the delightful chance to attend a full performance evening of all 12 poems from the Hot Poets project in the Purcell Room of the Southbank Centre.

In collaboration with the Met Office, the London School of Economics, the RSPB and nine other climate change partners, Tongue Fu, Chris Redmond and Liv Torc present Hot Poets – poems of agency and action for COP26 and life beyond, written by 12 of the UK and Africa’s most well-known spoken word artists, working with scientists, climate educators and engineers from leading environmental organisations and charities across the world.

From whale poo to wildfire, each poem covers complex, vital and inspiring scientific subjects, including: flood and fire prevention; empowering African women on the equator to plant forests; the regreening of the Sinai Peninsula; putting Forest School education on the National Curriculum; beach data as a way to leverage change in plastic manufacturing; climate litigation; the restoration of peatland; the hidden energy underground; more effective weather warning systems; and the green whale’s impact on climate recovery.

Thanks to support from Arts Council England, Hot Poets aims to prove the intrinsic value of placing the arts front and centre in the climate change conversation, reconnecting people to hope, cutting through the doom and despair, and sharing positive ways to gain agency and take action in the fight against climate catastrophe.

The evening started with Chris Redmond asking the audience to contribute suggestions for three styles of music. Never the shy one, I called out “Gregorian Chants”, expecting Chris to have plenty of suggestions and to choose ones which would work for whatever he had in mind. He received two other suggestions of Nursery Rhymes and Country and Western. Somehow, the three piece band managed to pull those three genres into a thrumming piece of music to which Chris performed his Tongue Fu Rap with full audience participation. I really recommend that if you’re able to attend a bit of Tongue Fu, then you do. See https://www.tonguefu.co.uk/

This set the tone for a dynamic and unusual evening of performance poetry.

Chris, Liv Torc and the Tongue Fu Band led eight of the Hot Poets through live readings of their poems, with the remaining four appearing by film. Each of the poems was accompanied by music from the band in styles requested by each poet. These went from the heartbeat of the planet to 1970’s police show music and many more weird and eclectic choices.

This added a wonderful dynamic element to the performances, with Zena Edwards’ Mother of the Forest poem deeply stirring the emotions of all who were there.

There were two additional poems, from the winners of a competition embedded in the videos of the Hot Poems. Each film contained a word which had to be included in a new poem by the contestants. The winners performed brilliantly, seemingly very at home on a stage in front of a large audience.

We are very grateful to Liv, Chris and the Hot Poets for the work they are doing to show people that they are empowered to do something about climate chaos.

Simon, Tracey and The Team

PrevPreviousThey Ran for the Trees!
NextAre We Living In A Dystopian World?Next