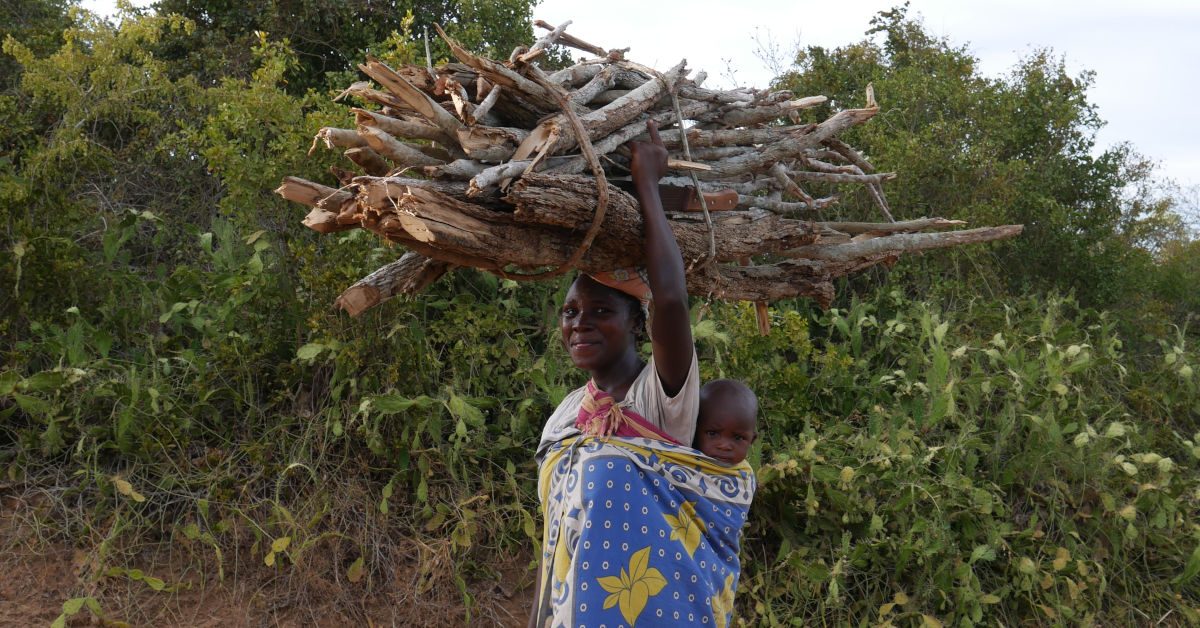 This is a story that many women in rural Kenya (and indeed in other parts of the world) share. The hard truth of it is shocking enough, but now try imagining it’s your best friend Anna in Bristol in this position. Or your sister or your daughter. Or you.

To see how The Word Forest Organisation are trying to help women like Rehema, read the articles about the women’s empowerment group, Mothers of the Forest, on our website or watch our documentary #TreesAreTheKey narrated by Kate Winslet.

The images in this article are not of Rehema, they are some of the amazing women in the Boré community who will all recognise part of Rehema’s story.

It is early morning, dark, and she walks through the bush, baby on her back, a twenty litre jerrican in each hand. The journey to the river, and the hole that the community has dug to try and filter the water, takes about half an hour. The earth is cold and moist beneath her bare feet.

She’d risen when the cock crowed for the third time, knowing she could put it off no longer. Slipping off her sisal mattress on the floor, she’d lit the kerosene lamp and wrapped herself in a brightly coloured leso. Leaving her husband asleep, she’d headed out to the doorless, open kitchen. The sky was still black and she’d been glad to find that no stray dogs had wandered in to spend the night. She’d cleared the ashes from the previous day, made a fire and cleaned the remains of last night’s ugali from the pot so that she could make porridge for her children. As the mixture had begun to thicken, she’d left it to cook and gone to wake them.

She’d begun with the eldest, her nine year old daughter who always helps her siblings get ready for school. Then she’d picked up the baby, still fast asleep, and set off to collect the water.

With two full jerricans, she walks the half hour back to her home, feeds the baby with a cup of porridge set aside by her daughter, then takes the two goats and tethers them nearby where there is enough grass. She sweeps the kitchen and picks up her basket and more water containers, this time a twenty litre and a ten litre.

She returns to the river, where she fills the containers and leaves them to collect later, then continues on to the shamba of a local businessman. A shamba is land on which the owner can grow crops and the man sometimes has his land tilled for him. He pays one hundred and fifty shillings (just over one pound) a piece and Rehema takes two. She could do more but she needs to go and work at her shamba too. The work takes the best part of the morning and earns her just enough to buy two packets of maize flour.

She hastens to the nearby shop to buy the flour then collects the larger water container from the river, leaving the smaller one for her daughter to bring home after school.

Baby on her back, jerrican on her head, she hurries on to her shamba. She knows her children will soon be there for lunch so, retrieving the cooking pots and plastic plates she keeps hidden there, she collects wood to make a fire and picks vegetables for relish.

Rehema eats with her children, saving some food for her husband who has also been working elsewhere. Her older two return to school but the third remains as she is in pre-primary. This is a relief to Rehema as now she can work without the baby on her back.

Rehema works the land. Soon she is joined by her husband and they work and walk, tilling the soil, sun burning on their heads, ground burning under their feet. Neither of them can afford shoes, but they have managed to buy slippers for the children for school. And uniforms, although they are old and very worn.

Her children return from school, the oldest with the smaller jerrican on her head.

Home from the shamba, where she has left her husband still working, she searches for firewood while her eldest brings in the goats. Then she looks for relish while her daughter fills a basin with water and gives her siblings a bath. While Rehema cooks, her daughter bathes.

Rehema’s husband arrives just in time for supper and after they have eaten, she fills a basin for him to wash. He goes out for a few hours to drink palm wine with his friends, while she gets the children to bed and takes her bath.

It’s only a few steps to her mattress but she is exhausted. She closes her eyes, knowing that in a few hours the cock will crow and she must rise and do it all over again.